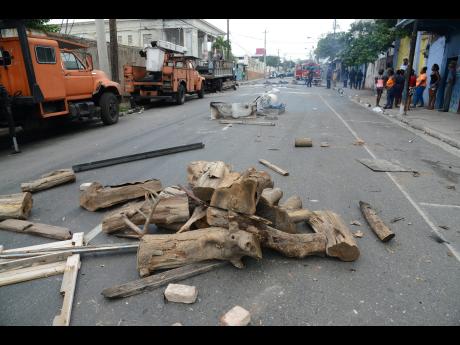 Rudolph Brown
Residents of Orange Street in Kingston block the road and set fire to debris in protest against what they claimed was police brutality yesterday.

Accusing the police of using excessive force, residents along a section of Orange Street, Kingston, in the vicinity of Bulla Lane, yesterday set fire to debris that was used to block the road.

Residents complained that the police used pepper spray on them and also beat a number of persons.

Some suspect that the incident could have arisen from the recent release of a man who completed a 20-year prison sentence.

The residents claimed that the ex-con and a group of men were allegedly rounded up, beaten and taken away to the Kingston Central Police Station.

Mary Edwards, grandmother of the ex-con, claimed the police are deliberately targeting her grandson.

She also told The Gleaner that she was abused when she went to the Kingston Central Police Station.

"I never know my grandson in there. Him did deh a prison fi 20-odd years and dem let him out Tuesday. Mi go down a Central and the inspector ask mi who mi come about and mi tell him. The other man said to mi seh mi fi come out. One a dem grab and push mi and mi grab him back. The policewoman come push mi, and mi push har back, and den she push mi dung," she explained.

A constable at the Kingston Central Police Station told The Gleaner yesterday that all questions surrounding the incident must be directed to the shift commander, who she said was on patrol at the time.