JCF graduates get their feet wet in Half-Way Tree operation 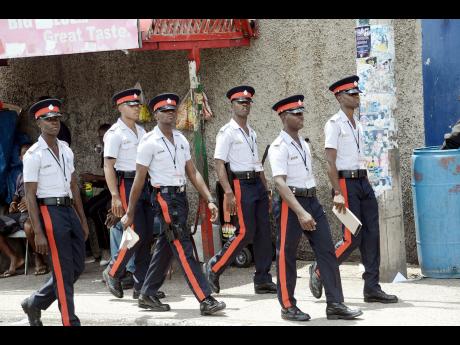 Norman Grindley
Recent graduates of the police force heading back to their station after an operation in Half-Way Tree yesterday.

Police personnel, including a batch that graduated two weeks ago, flooded Half-Way Tree (HWT) yesterday as part of an initiative of the Police High Command to eradicate lawlessness from society.

Similar to yesterday, increased presence within the HWT area will become a major focus for the police going forward, despite resource constraints, according to senior superintendent in charge of the Traffic Division, Calvin Allen.

Numerous tickets were issued during the process, and a number of licence plates and tints removed from public passenger vehicles. Many persons were also arrested for various offences, including vending.

"Increased presence, focusing on HWT, is because of how HWT is viewed by us, as a central hub in the Corporate Area, and the number of persons who traverse HWT in terms of those on foot and vehicular traffic. It requires this sort of constant presence, especially to maintain order and enhance the safety of our citizens," Allen told The Gleaner.

He said that efforts will not go dead after yesterday's heightened activities. "If persons think that this was just a one-off thing, they need to take stock, because we are going to remain fervent and focused in the role we have to play as the national security apparatus in making our citizens safe and secure and [creating] greater order on our roads.

"For the morning programme, more than 55 tickets were issued and about 12 registration plates removed from vehicles found to be defective," Allen said.

The recently graduated policemen who participated in yesterday's operation will continue to be integral to the mission of making citizens feel comfortable, Allen said.