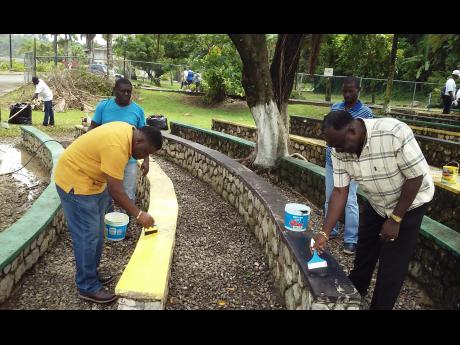 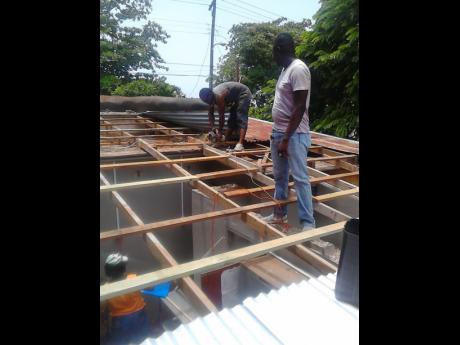 The true spirit of Labour Day was evident across the eastern parish of Portland as dozens of patriotic community residents turned out in large numbers to participate in various projects.

Despite the inclement weather, which was heavy at times, a team led by Mayor of Port Antonio Paul Thompson, converged on the Neville Antonio Park, where the parish project was being executed.

The Neville Antonio Park, which is a picturesque spot, especially for those seeking comfort, relaxation, and excitement, was selected as the parish Labour Day project, as it offers Portlanders and visitors an opportunity to enjoy nature's beauty in a park that is captivated by its lush vegetation.

"We are seeking to restore this park and its amenities," said Thompson.

He added, "The scope of work includes the repainting of seats, repairing of a perimeter fence, landscaping, repairs to its sanitary convenience, and beautification of the park. A number of agencies, including the National Housing Trust, National Youth Service (NYS), Social Development Commission, the police, fire department, and civil-society groups are participating in this project."

NYS Parish Field Officer Kerine Mitchell pointed out that her team, which comprised 18 empowerment participants, took part in the programme despite them having mild intellectual disabilities.

"It really provides them with six months' work experience and 20 hours of volunteerism," said Mitchell.

She added, "Engaging them today in this project teaches them how to volunteer. They are eager and excited to participate and, although they have intellectual disabilities, they are able to function efficiently with guidance. They will be participating in painting, raking, and ridding the area of broken tree branches."

Meanwhile, several projects were undertaken in west Portland, including repairs to the roofing at the St Margaret's Bay Clinic. It was ordered closed following more than five days of torrential rainfall. The work is being undertaken by the Portland Health Department.

Three garbage skips were under construction in the Hope Bay Division, along with beautification work in the Rodney Hall square. Also in west Portland, repainting of the Chepstow Community Centre was nearing completion, which was being done by members of the Chepstow Youth Club.

Additionally, One Jamaica Foundation undertook the task of repairing the Fairfield Early Childhood Institution in the Balcarres Division, with the aim of getting the school certified by the Early Childhood Commission.