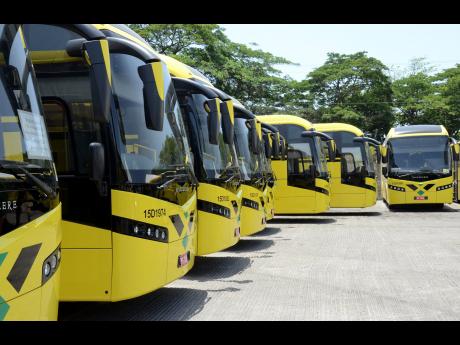 The Jamaica Urban Transit Company (JUTC) has opted not to renew the contracts of three senior managers whose association with the state-run entity ended on Tuesday.

Cecil Thoms, communications manager at the problem-plagued company, told The Gleaner yesterday that IT Manager Brian Tulloch had been with the company since it began operations in 1998.

His contract, along with that of depot manager at the Half-Way Tree Transportation Centre Errol Simpson, and Michael Brown, maintenance manager, Ashenheim Road, were not renewed.

"In the case of Mr Reginald Allen, the former sales and marketing manager, he opted to resign and did so effective yesterday. He would have resigned pending an investigation that is still being conducted. It is not final. Remember, there were some financial irregularities uncovered in the charter unit, so he has opted to resign, along with Mrs Jean Dixon-Edwards," Thoms told The Gleaner.

The JUTC thanked the individuals for their service and offered best wishes to them in their future endeavours.

Thoms said that in early April, financial irregularities were observed. The observation led to a decision by the managing director that a preliminary audit be conducted.

"That audit, the preliminary findings of which have been discussed at the board, is still being done. Those persons who were assigned to the charter unit were asked to step aside, as in, sent on leave to allow for the necessary checks and for the audit to be done. As I said, the audit still continues. In the interim, these persons, including Mr Reginald Allen, who had oversight responsibility for the unit, opted to resign," Thoms explained.

Cecil Thoms, the Jamaica Urban Transit Company (JUTC) communications manager, said that two other employees of the sales and marketing unit have sent in submissions, and under the principle of natural justice, they will be allowed a hearing. Thoms said that they would be given the "opportunity to tell us what they know, and that will be taken to the board for a decision to be made".

Former chairman of the JUTC, the Reverend Garnett Roper told The Gleaner that he was aware of audits being undertaken.

"No one has contacted me to ask me any questions about any aspect of the audit," remarked Roper, who is currently in Thailand.

Former managing director, Colin Campbell, said that Tulloch is the expert in the fare-collection system that was developed by a company in the Czech Republic and bought by the JUTC.

"He was the manager of the IT department and the system is called FareOn!"

Like Roper, Campbell said that he had not been contacted, and the audits being done were not during his tenure as managing director.