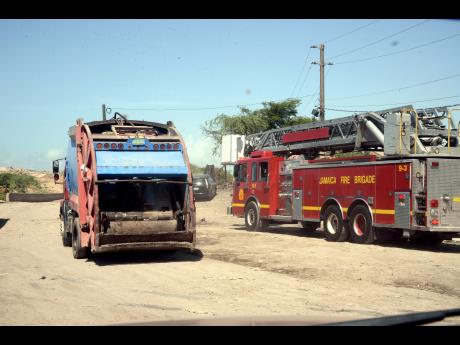 Norman Grindley
A fire truck parked outside the entrance to the Riverton Landfill in St Andrew yesterday morning after a fire was put out at the facility.

The National Solid Waste Management Authority (NSWMA) is to seek help from the police after fires at five of its waste-disposal sites between April and June.

Executive director of the NSWMA Audley Gordon said that the latest fire occurred early yesterday morning at the Riverton Landfill in St Andrew.

"That fire started about 1 a.m., and we activated our emergency protocol, with the firefighters arriving on the scene early, so it was put out before daybreak. By mid-morning, even the smoke had cleared up," Gordon told The Sunday Gleaner.

He noted that between April and yesterday, there have been fires at the NSWMA waste-disposal sites in Myersville, St Elizabeth; Retirement, St James; Haddon, St Ann; Doctor's Wood, Portland; and Riverton.

"It is too early to say, but we could be seeing instances of sabotage; and that is why I will be urging the police to pay closer attention to our sites," said Gordon.

"It would be unfortunate if this was sabotage because it is expensive for us to put out these fires. For the fire at the Doctor's Wood disposal site alone it cost us $3 million to put it out.

"To compound the matter is the harmful environmental impact of these fires. We are working hard to prevent fires at these waste-disposal sites although there is sometimes spontaneous combustion, but it would be real sad if there were persons deliberately lighting these facilities," added Gordon.

The last major fire at the Riverton Landfill cost the NSWMA $235 million and left scores of persons needing medical attention.

"We are working to do things differently at the NSWMA such as improving the collection schedule, providing better service to all Jamaicans, and modernising the operations at the landfills, and these fires are unwanted distractions," said Gordon.

The NSWMA boss said that he plans to meet with the leadership of the police force soon to share the concerns of the agency.