Gov't backs China's One Belt, One Road policy - Holness says if possible, Ja could join in near future 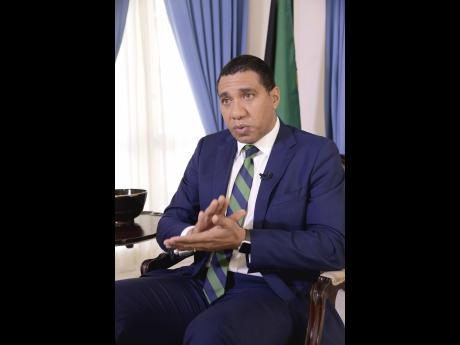 Prime Minister Andrew Holness has declared that the Government of Jamaica is supportive of the People's Republic of China's 'One Belt, One Road' (OBOR) economic policy and has an interest in becoming part of the initiative in the future.

Giving the keynote address at the official production restart of the Alpart Bauxite Refinery in Nain, St Elizabeth, yesterday, Holness says that the Chinese policy, which was originally established in 2013 to underwrite billions of dollars in infrastructure investment in countries primarily in Europe, Asia, and Africa, could be quite beneficial to Jamaica.

"I would like to note the announced economic policy of China, the One Belt, One Road, and (state) that the Government of Jamaica endorses this policy," said Holness.

"At some stage, we would want to formally, if possible, join in what we think is a very beneficial, but very noble expression of not just the Chinese aspiration for development, but the development of economies right across the world through a cooperative and inclusive strategy," continued Holness.

The OBOR is China's way of pushing to secure a larger role in global affairs primarily through the desire to coordinate manufacturing capacity with other countries in areas such as steel manufacturing.

With the restart of the Alpart Bauxite Refinery poised to create an economic boost for the country, especially in St Elizabeth, Holness said that the decision by the Government to forego the levy income with Alpart's new owners, Jiquan Iron and Steel Company (JISCO), for five years will be beneficial to Jamaica as the Chinese firm has committed to investing more than US$2 billion in several infrastructure development projects that will be undertaken to support their operation.

The infrastructure upgrade will include the development of Vernamfield in Clarendon; the expansion of Port Kaiser, St Elizabeth; construction of a new 500,000 tonnes aluminium smelter; and the development of an industrial park in Nain.

In addition to its bauxite refinery operations, the Chinese firm has also expressed an intention to expand into manufacturing and farming, using the mined-out lands.

The Alpart plant, which was previously owned and operated by the Russian company UC Rusal, is expected to generate between 800 and 1,000 jobs. Based on the agreement with the Chinese, 70 per cent of the jobs must go to Jamaicans.