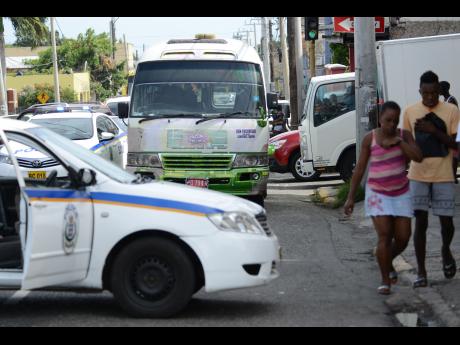 Ricardo Makyn
Police vehicles surround the bus which was being driven by Amasha Mathias when he was fatally shot last Thursday.

The bus driver who was killed execution-style last Thursday inside the vehicle he operated had been shot, allegedly by a policeman, earlier this year, in a case that had left investigators suspicious.

The bus driver, Amasha Mathias, 33, was expected to be the main witness against the policeman if the matter ever went to court.

But Mathias will never have his day in court as while he was seated around the steering wheel of the Toyota Coaster bus he operated last Thursday, a man posing as a passenger walked up to him and shot him in the head. He was pronounced dead at hospital.

The police report that Mathias was the only person injured in the brazen mid-afternoon shooting along Slipe Road in the Corporate Area.

The Independent Commission of Investigations (INDECOM) confirmed yesterday that it was formally notified by the Jamaica Constabulary Force about an incident in Lawrence Tavern Square, St Andrew, on May 20, in which Mathias was shot in the leg.

"There was an ongoing investigation into that incident," Deputy Commissioner of INDECOM Hamish Campbell told The Sunday Gleaner. He declined to comment further.

But Sunday Gleaner sources say Mathias was driving his bus in Lawrence Tavern Square when he was stopped by a policeman for a number of traffic violations.

An argument developed between them and the bus driver was shot by the cop after he allegedly brandished a knife.

The shooting was reported to INDECOM and, according to the source, it was being viewed with suspicion.