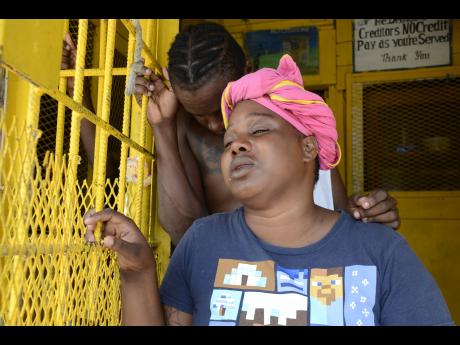 Errol Crosby
Tameka Graham, mother of 11-year-old Michael Keating, who was shot in the face and killed in Wilton Gardens, also called Rema, in St Andrew, on Sunday.

Robust investigations have led the police to capture a man who is accused of shooting and killing 11-year-old Michael Keating on Sunday night, in the St Andrew community of Wilton Gardens, popularly called 'Rema'.

A source close to the incident confirmed with The Gleaner that he was picked up on Tuesday in St Mary and is now in police custody, after investigators from the Kingston Western Division received intelligence that he was headed for the parish.

The man is said to be fully cooperating with the police and reportedly claimed that whatever happened that night was accidental.

He is expected to be charged soon.

In the meantime, Superintendent in Charge of the Kingston Western Division, Howard Chambers, alongside the Victim Support Unit, has organised counselling for Keating's mother, grandmother, and other members of his family. The chaplaincy unit of the Jamaica Constabulary Force was also a part of the counselling sessions.

Keating's grief-stricken mother, Tameka Graham, told The Gleaner on Monday that her son was killed by a man well known to the family, dismissing reports that the boy was shot in the face while playing with a "careless gun" (an illegal firearm).

The accused vanished shortly after the incident.

"Weh RJ (Keating) woulda get di gun from? Mi deh a di gate when mi hear di shot. When mi hear di shot, mi hear di youth seh RJ shoot himself. When mi go inna di house, mi see him have the gun inna him hand and mi pickney a point pon him and waa seh sumn but a bare blood a come from him nose. After that mi run, mi couldn't do nothing but run," Graham said.

Yesterday, Graham stressed that she "feels good" that the accused killer was caught and said she was confident that justice will be served.

Keating's five-year-old sister, who was in his arms at the time of the incident, was also injured by the same bullet that killed him. She was hospitalised.

Keating would have started grade six at the Boy's Town All-Age School on Monday. He recently promised his mother that he would achieve in school what she had not been able to achieve academically.