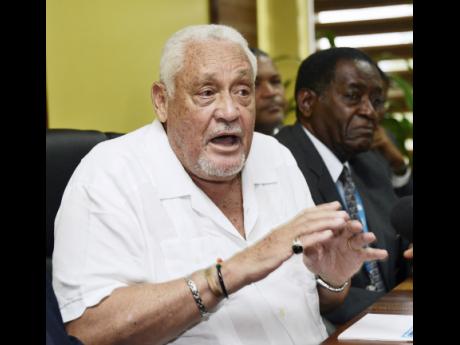 Ian Allen
Mike Henry (left), minister of transport and works, during a press conference to update the country on repairs to radar/communication operating systems used by air-traffic controllers that was damaged by lightning. Looking on is Leroy Lindsay, special advisor to the minister.

The Government is hopeful that its efforts to achieve triple surveillance capabilities by the latest 2020 as a part of a wider $J3.5-billion investment will prevent the closure of the Jamaican airspace in the future.

"This is not chicken feed, as some people might think. It is an investment wrapped up in quality assurance, in keeping with modern technologies our international obligations, and more importantly, safety and the pride we occupy in the aviation industry," added Henry.

Airspace activity has since been partially restored, with Henry advising that full restoration of air services should take place within the next 48 hours (today).

Earlier this week, Opposition Spokesman on Transport Mikael Phillips called for an investigation into the closure of Jamaica's airspace for more than 24 hours.

He argued that the transport minister and the Jamaica Civil Aviation Authority should immediately investigate and provide a detailed explanation of the closure, as Jamaica's civil-aviation status could suffer reputation damage from this long delay in service resumption.

In addressing concerns over the closure, Henry stated that he has since instructed the boards of Aerotel, JCAA, and the Airport Authority of Jamaica to order a full investigation into the circumstances surrounding the shutdown of the airspace and to provide him with a report in the shortest possible time.

On Wednesday, JCAA chairman Phillip Henriques explained that the agency was about to change over to a new air-traffic control system.

Henriques explained that aspects of the new system were currently being used as back-up while the old radar communication system is repaired.

The chairman added that air-traffic controllers were being trained to use this new system and so were not able to fully utilise its features to perform the full suite of air-traffic services that are normally provided to airlines at this time.

Consequently, he said, the JCAA has had to be relying on a contingency team to provide limited air-traffic services, hence the reason for the partial closure of the island's airspace since Friday.

All air-traffic controllers should be fully trained to operate the new system by the first week in October.