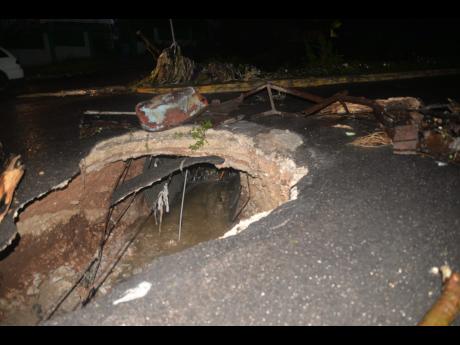 Montego Bay, St James, took a major battering yesterday afternoon as heavy rains, which lashed the city for over four hours, caused major flooding and dislocation and resulted in severe infrastructural damage on a scale not seen in many years.

Scores of persons, including students, were trapped in workplaces and schools as the city came to a virtual standstill. High flood waters and damaged roads kept vehicles off the road.

When the rains subsided, many persons had to resort to walking miles to get home.

"I had to abandon my vehicle under the Bay West Parking lot, as when I rush around there to get it it was already completely covered over with water," said businessman Martin Smith, who was among the countless persons who had no choice but to walk home.

In some sections of Montego Bay, including Sam Sharpe Square, many buildings were partially flooded as the drains were not able to manage the several inches of water that was dumped on the city.

In fact, the situation created gridlock in areas such as Freeport, Bogue, and Rose Hall as the traffic came to a standstill.

FROM MANHOLES AND TOILETS

At the Farm Primary and Junior High School in Green Pond, teachers and students were trapped at the school up to late last night as one road leading to Montego Bay in one direction caved in and the other leaving through Cornwall Courts was blocked by flood waters.

"We have some students and teachers who are trapped, so unless a way can be found to get them home, chances are that they will have to spend the night at the school," a teacher told The Gleaner.

"Some parents have called to say they will be walking to the school to get their children. Some are coming from as far as five miles away."

In the one-bedroom section of the Cornwall Courts housing scheme, several houses were flooded out as water not only came gushing through their doors and windows but also entered from manholes and their toilets.

"Everything in the house is now wet - bed, table, dresser, you name it," said Dawn Spence, who was close to tears as she spoke.

"I invested in this house and now I have to consider moving to someplace else because this is the second bad flooding experience I have had here in Cornwall Courts."

While the rain was pelting the city, there was no let-up in the city's criminal

carnage as two persons were shot dead by thugs. One person was killed in North Gully and another in the volatile Melbourne community.