Flashback! - Danhai case still stalled as NHDC writes off more than $2b in Operation Pride losses 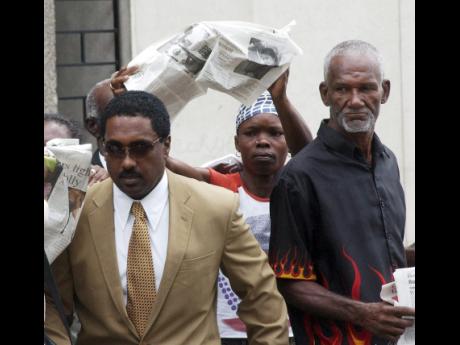 Norman Grindley
In this October 2005 photo Danhai Williams (left) with supporters as he approached the Supreme Court for his trial in relation with the Operation Pride case. 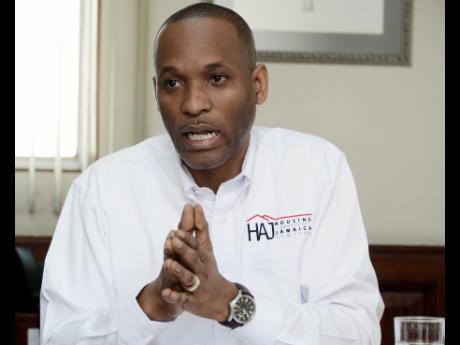 More than a decade after east Kingston businessman Danhai Williams and six others were charged with 87 counts of fraud involving the Operation PRIDE scheme operated by the National Housing Development Corporation (NHDC), there has been no new development in the case which involved losses of nearly half a billion dollars.

The prosecution, which hung on testimonies of two employees of the NHDC - Gerald Tobias, a quantity surveyor, and Lloyd McLean - remains in the system as both men left the island and have lived overseas since.

Recently, a source who worked closely with the case a decade ago told The Sunday Gleaner that the men were located overseas during the trial as the prosecution tried desperately to get the witnesses to court.

"I recall one saying he would not come back to testify because he was deadly afraid, and the other saying maybe he would come back," said the source.

Williams, who operated the company Danwill Construction, and the other accused were charged in October 2003 following a one-year probe into financial irregularities in the NHDC/Operation PRIDE projects. They are accused of defrauding the NHDC of $451 million.

During a recent Gleaner Editors' Forum, executives of the Housing Agency of Jamaica (HAJ), which emerged out of a merger of the NHDC and the Caribbean Housing Finance Corporation, said they were not aware of any new developments in the case.

"I know there was a case against Danhai Williams but I have not heard anything about that case in the last 12 years," said Gary Howell, managing director of the HAJ, as he responded to questions from Gleaner editors and reporters about the Operation PRIDE programme.

"What happened was that there was over $8 billion expended and collection at the time was just over $2 billion. What has happened over time, and still happens today, we are collecting from some of these communities.

"It's not like we have lost all of the money. There has been some loss. I believe we had taken a hit of about $2.1 billion over time," said Howell.

Operation PRIDE was launched by the then P.J. Patterson administration as a scheme to provide low and middle income housing solutions for Jamaicans. But questions surrounding the spending of the money led to the resignation of the housing minister, Dr Karl Blythe, and the subsequent action against Williams and the others.

"The process started as a very good concept but execution was where the problems were. You had 12 staff managing more than 100 projects, and that was a recipe for failure from the start.

"It involved what was referred to as Provident Societies and they were supposed to play an integral role in each of these communities. But they would have needed oversight, but the limited staff was stretched to provide oversight," said Howell.

He argued that the programme was fraught with poor management practices, which led to mismanagement of contractors and significant overruns on projects which were also affected by changes in the scope of the work.

In the meantime, Garfield Sewell, senior manager for finance and information at the HAJ, said a decision was taken several years ago for provisions to be made for the Operation PRIDE losses.

"A decision that was made to analyse all of the Operation PRIDE projects and make a provision for all exposure to the agency at that point, and based on that assessment,

provision was made of the loss of $2 billion, and I think it's currently a part of our financials ...," Sewell told the Editors' Forum.

What was Operation PRIDE

The Programme for Resettlement and Integrated Development Enterprise (Operation PRIDE), was launched in 1994 by then Prime Minister of Jamaica, P.J. Patterson, to address several issues, including informal settlements.

Some of the objectives of the programme included the resolution of the shelter needs of a majority of low income Jamaicans through the establishment of new planned settlements and the upgrading of existing settlements; the improvement of environmental and public health conditions in settlements throughout the country; and the mobilisation of resources in the informal sector towards their improvement, employment creation and national development.

The programme was later suspended due to a number of implementation challenges.