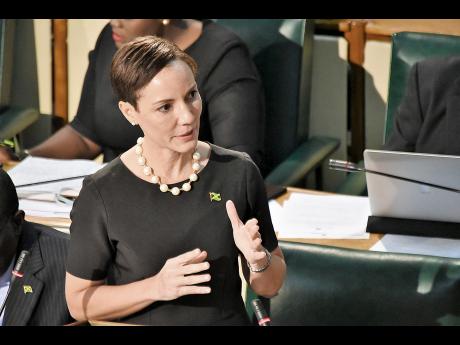 The Ministry of Foreign Affairs and Foreign Trade is pushing to reduce debt related to Jamaica's Caribbean Community (CARICOM) membership. Portfolio Minister Kamina Johnson Smith disclosed that the country owes the CARICOM Secretariat just under $500 million as she addressed the Standing Finance Committee in Parliament yesterday.

In the Estimates of Expenditure for 2018-2019, the ministry has been allocated a budget of approximately $1 billion for CARICOM affairs. Responding to a question posed by Opposition Member of Parliament Morais Guy, Johnson Smith said that the addition of $150 million to the Budget would not clear the arrears. She pointed out that in 2015, an agreement was struck with CARICOM in an effort to liquidate Jamaica's debt over a five-year period.

Johnson Smith explained "What we have found is that penalties and interest are killing us, and we would remain on that debt mill for quite some time. So the Ministry (of Finance and the Public Service) has, and we are very appreciative of it, agreed to provide us with some more funding to pay down. So we are ahead of schedule."

One of the 33 recommendations from the Report of the Commission to Review Jamaica's Relations within the CARICOM and CARIFORUM (Caribbean Forum) frameworks proposes an urgent examination into how member states' contributions are calculated. While the full report of the commission, which was headed by former prime minister Bruce Golding, is to be debated in the House or Representatives, Johnson Smith asserted that the Government believed that Jamaica's contribution is too high, but it is committed to honouring its obligations.

According to the foreign affairs minister, Jamaica is up to date with payments to the African, Caribbean and Pacific Group; the Association of Caribbean States; the Commonwealth, the Organization of American States; the United Nations, except in relation to peacekeeping; and the World Trade Organisation.