Extortionists or helpers? - Motorists fume over being charged to park on the streets of Kingston but the men who charge say they are offering a service 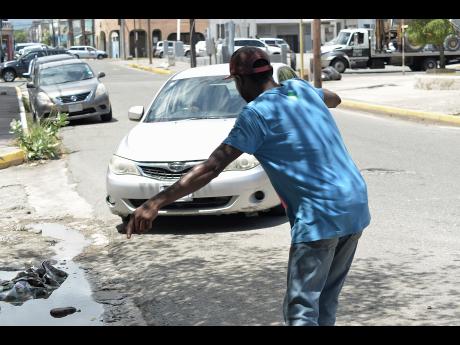 Ian Allen
One of the hustlers directing a motorist where to park on Church Street in downtown Kingston. 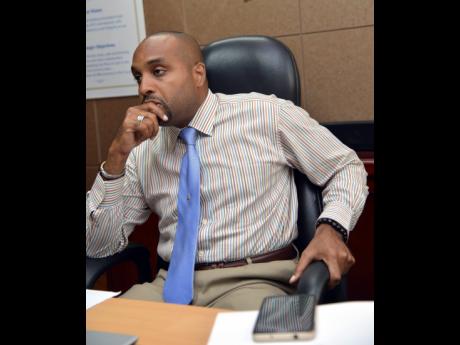 They claim they are offering a legitimate service, but for most motorists they are 'street side extortionists' demanding that they are paid before allowing persons to park.

"I rather park my vehicle at home and take a bus to downtown Kingston because I am not paying them $100 to park on the government road," said Martin, a motorist from Portmore, St Catherine.

"It can't be fair that they are allowed to claim legitimate parking spots and demand that you pay. That is just another form of extortion that the authorities are allowing to develop. First, it was in the heart of downtown and at sporting events, but now they are turning up everywhere," added Martin.

But the men say they are just hustlers who are offering a service by leading persons to parking spots while charging a 'small fee' to watch the vehicles to ensure they are not broken into or stolen.

"When you check the levels, this is not extortion. If you don't take your money out a your pocket and give me, I cannot go in your pocket and take it, so I don't see that as extortion. You know why the Government see it as extortion because them nah get a cent out a it," said JB, one of the many men offering this 'service' in downtown Kingston.

The 47- year-old 'JB' is from Southside in Central Kingston and he has lost track of the number of years he has been on the streets, parking and washing cars. He has been arrested numerous times for it.

Robert Hill, CEO of the Kingston and St Andrew Municipal Corporation, says addressing this issue has been a challenge for the council. He told our news team that on several occasions they have taken action to remove the men from the roads but they keep coming back.

"We are going to have to look at a new method because when you move them over a day or two they are back, we have limited resources so we try to move strategically and prioritise the areas.

"Part of the solution is the planned on-street parking mechanism. Once approved and vetted (it should) deal with this issue forcibly, because persons will now pay a legitimate authority for parking on the street. But until then, we are going to have to address it from a security standpoint so we can create some semblance of safety," said Hill.

Another hustler, 25-year-old 'Chip-Chap', has been charging persons for parking spots on the street for three years.

According to Chip-Chap, he sees his role as assisting motorists.

"A help we even a help out, because you have the wrecker on the road, and from the wrecker see you park anywhere loose them a take way your car. when people come them not even know where to park because the car park, is a four-storey car park, and it ram more while so a help we a help out," said Chip-Chap.

With two sons aged four and nine depending on him, Chip-Chap says people in his position are often misunderstood.

"Them people deh no understand that people afi survive, all sort a people afi survive, but through them in a better position, them a go look down on somebody. What a go happen to the youths them when police take them up and fling them a jail?" argued Chip-Chap.

JB added that persons who were attacked or extorted by persons offering parking spaces on the streets should report it to the police so innocent persons, like himself, don't get grouped with the wrongdoers.

Meanwhile, head of the Kingston Central Police Division, Superintendent Robert Gordon, says while he has not received any complaints from motorists in recent times, the men cannot be allowed to harass persons to give them money to park in a public space.

"Now that it has been brought to my attention, I'm going to go into the space myself and I'm going to speak to my operatives about it," said Gordon.