Motherless, jobless but not hopeless - Kimani searching for an opportunity 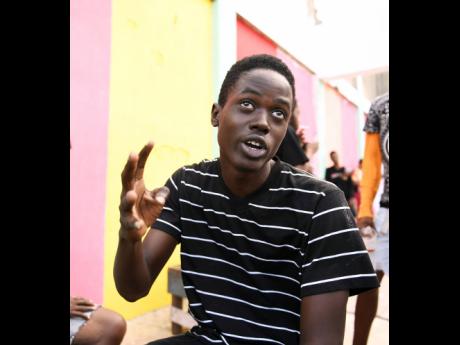 Tel Aviv is the second most populous city in Israel - after Jerusalem - and it is the financial and technological centre of the country.

In Jamaica, 'Tel Aviv' is a small area in central Kingston where poverty reigns; where illiteracy, crime, violence and hopelessness walk hand in hand.

It's where decades-old gang wars set danger lines, which prevent people from walking freely. Where no-man's-land is any man's land, and where danger is ever present.

"Miss, I am 19 years old. I used to go to Holy Trinity (High) School. A leave when a 16. A didn't do CXC. Me did just deh a school a bad, and dem ting deh yes. A gi we self trouble. But I was doing well enough, for the teachers dem to recommend me for CXC and to recommend fi graduate," said Kimani at a Gleaner/RISE Life Management On the Corner with Unattached Youths forum in Rum Lane, last Wednesday.

"But, the way my family set up, when I really look in a it, I say, 'If a do it and fail it, a would a burn up mi bredda money. If a do it, and pass it, it would a mek him happy,' but I neva want take it an fail an let him down, so a neva take any," added Kimani.

Now the 19-year-old could be regretting that decision as he struggles to find a job as he moves into adulthood.

"I need work. If a have a work yah now, mi would a much better off. I love welding and a sign up to do it. But a would a do anything. Any office work, Miss," he said almost pleadingly.

Kimani has had no educational opportunities, no skills training and no job in the last three years since he walked out of school.

Still, he would like a job in an office to do "anything".

He said he has no children, is not wanted by the police and is not involved in any criminal activity. That may be his best qualification.

"I am waiting for a call to go to HEART (the national training programme). I am also on the CSJP (Citizen Security and Justice Programme) and also on the HOPE (Housing, Opportunity, Production and Employment ) programme.

"I sign up for welding and carpentry and any of dem trade deh. I sign up for the CSJP now, about a year and half, but a just waiting on call," added Kimani as he indicated that he is hopeful that "something might happen soon" because they took his shirt size.

"Miss, a don't in a no trouble, but a don't feel safe," declared Kimani, as he added that he saw his mother murdered when he was just 10 years old.

He argued that in communities like Tel Aviv, the life of an individual could be snuffed out through baseless suspicion, or because of who your friends are.

Kimani is grateful for the peace which has held for the last two years in the community, but expressed concern that anything could trigger the violence.

"Illiteracy is rampant in here. Man, woman and children. Nuff youth like me can't read or write. Dem not brain wise but dem street smart more than anything," said Kimani.

"A whole a people go do carpentry. If you knock up something and show dem, dem can do the work. But if you put de same thing on paper, dem caan read it. Dem don't understand how fi move from point A to point B. Miss, I just want an opportunity to be book smart and street smart. And I know I have what it takes to do betta dan dis," declared Kimani.

No age limit on education – 43-year-old mother of four heading back to school
Save the youths with music! - Southside wants a recording studio to occupy the minds of unattached youngsters
'Blame the parents!' - Without guidance, Tel Aviv children becoming 'shottas'
Cruel & clueless - 'Tel Aviv' held hostage by young gangsters who don't know what they are fighting for
Crime college 'Tel Aviv' - After 20 arrests David now determined to shape a different destiny