Bounty gives 'Birthplace of the Nation' a facelift 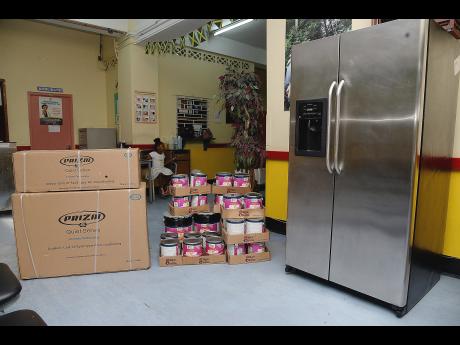 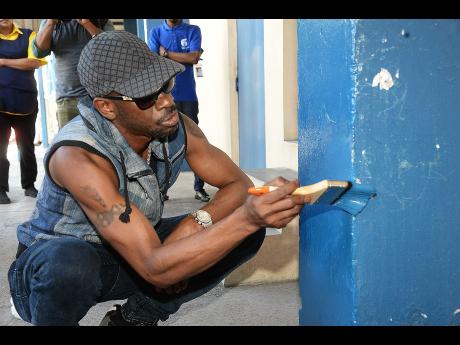 Renowned for his powerful voice, hardcore lyrics and commanding stage presence, popular entertainer Bounty Killer yesterday showed that his painting skills were not too shabby as he applied fresh coats of paint to sections of the Victoria Jubilee Hospital (VJH) on Labour Day.

The entertainer, whose given name is Rodney Pryce, had just gifted 100 gallons of oil paint, a split air-conditioning unit, and a refrigerator, valued at over $200,000, to both the VJH and Kingston Public Hospital (KPH) through his Bounty Killer Foundation.

Yesterday's gesture came three months after Pryce donated more than 60 beds to the KPH to kick-start his foundation, a move he described back then as the "beginning of something great".

"When I got shot in 1986, it was to KPH that they brought me. I got good surgery and I never had any complication afterwards. Also, I was born at Jubilee, and since they are next door to each other - sister hospitals - this [donation] is just a perfect combination," Pryce said in an interview with The Gleaner.

"I was born here, then my life was saved here later. So is like my life is sentimentally attached here. This is just a small token for Labour Day, giving them a little facelift, but in the future, you will see the real things start happening," he added.

The 45-year-old deejay, who brands himself 'The Poor People Governor', suggested that education could also be an area of focus for his foundation, but he pointed out: "We have to save lives before we save lifestyles."

Pryce further argued: "I want a little jealousy of giving back to happen. I want people to feel bad about not doing enough. That's why we are doing this for the public to see. It is not showing off. It is showing other people that 'you are not doing enough'."

"Artistes have a lot of influence, so if we can get more entertainers on board, that would be good. But regular citizens must do it, too. You don't have to be rich. Three tins of paint can do it, too. It doesn't have to be 100. Do what you can," Pryce advised.