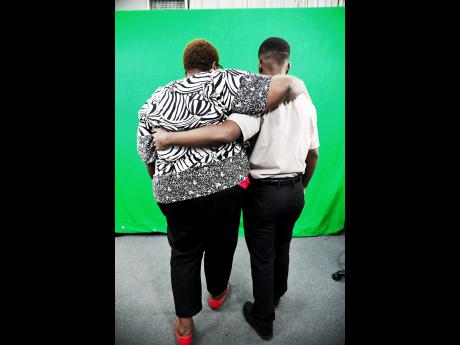 Norman Grindley
A 'cougar' posing with her 'toyboy'.

More than 50 per cent of Jamaica's boys between the ages of 15 and 19 years old are engaged in transactional sex, and one expert is convinced that this is because a number of unattached youths are turning to 'cougars' to provide money, favours, or gifts in exchange for sex.

Cougars are popularly defined as women in their 40s (or older) who date significantly younger men, generally at a 10-year age gap or more, and adolescent programme manager at the Ministry of Health, Marion Scott-Thomas, said this trend is being seen in Jamaica and is very worrying.

According to the 2012 HIV/AIDS Knowledge, Attitudes, Behaviour and Practises survey, 24 per cent of girls and 54 per cent of boys between the ages of 15 and 19 years old are engaged in transactional sex.

"Generally, it is among women, but we are seeing now where it is catching on with boys, unfortunately," Scott-Thomas told The Sunday Gleaner.

"We have higher rates of school dropouts among boys, more so than females, so that sort of accounts for how they are getting money, who is supporting them, how they are able to live. Some of them are engaged in transactional sex," added Scott-Thomas.

She argued that some of the boys do it to survive, while others engage in these relationships for material gains.

"I can't say what the factual reasons are, but we have some anecdotes, so you will hear about cougars and you think cougars are only overseas, but some young Jamaican men resort to older female partners who take care of them for lack of a better term, and in taking care of them, they provide sexual favours," she said.

Transactional sex among adolescents in Jamaica was one of the issues highlighted last week by UNICEF in its situational analysis for safety and justice for Jamaican children.

The report provides an overview of some of the major issues affecting Jamaican children in the areas of protection, health, education, social protection and the environment.

Scott-Thomas said that the issue of transactional sex is of major concern to the Ministry of Health, since the survey has shown that only 38 per cent of those engaged in transactional sex used a condom every time.

She noted that boys sometimes have a false sense of security when in a relationship with older women.

"An older woman may seem more established, more careful, more responsible, and they may not see any risk of a STI or HIV, or even pregnancies from an older woman."

Scott-Thomas has also found that multiple partnerships is especially high among the young boys, with some using the money they get from the sugar mommies to maintain relationships with girls in their age group.

She said that the findings relating to the high number of adolescent boys engaged in transactional sex are not alarming, given Jamaica's current reality as it relates to unattached youths.

"Unfortunately, we have a lot of unattached youths, young men who are not involved in any kind of gainful employment or skills training or anything, (just) sitting around. So how do they survive? Young people like to party, how do they get to go to the parties? If you have a nice sugar mama (and) you want a car, you get a car to drive," she noted.

"Transactional sex for us is not just money, it is gifts and favours, so if you can drive her car and go and 'floss' with your friends or pick up your next girlfriend or you can get the latest things, or whatever else from her, then that we will consider to be transactional sex," said Scott-Thomas.

She said that parents have a role to play in curtailing this trend. But mothers generally do not seem to have a problem with their adolescent boys having sex, and so the conversation about sex is different for boys when compared to girls.

"You don't want your girl to get pregnant, you want her to remain a virgin until she is married, while the boys are allowed to be free and prove their manhood by having sex early. Culturally, that is how we socialise our boys. I think we need to look into how that is harmful to them and the risk that it causes, how it affects them planning for their lives and setting goals.

"It is not just a health issue, it is a social issue and a developmental issue," added Scott-Thomas.