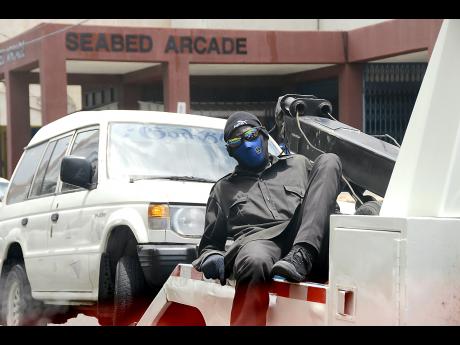 Ian Allen
A masked worker on a wrecker in downtown Kingston as it tows a vehicle which was illegally parked.

Several persons working on wreckers which tow away illegally parked vehicles in the Corporate Area are hiding their identities, and they claim this is a necessary practice.

Last week, one worker on a wrecker, his face masked and sweat soaking through his protective overall, said security was just one of the reasons they want to operate anonymously.

"It helps with the sun, because as you can see, the sun is not pretty out here. And another thing is that if you don't wear the mask you might compromise the operation," said the man who asked not to be named.

"Sometimes people know you in the streets and if they see your face dem will try to beg you a 'bly' and your heart will get soft. We can't afford that because as you know this is our work. So more time a man a beg but we can't do anything," he added.

The wrecker worker further claimed that masks served as a security precaution as despite the usual presence of a policeman on the wreckers, they could be in danger when they leave work and travel home.

According to the wrecker worker, motorists who travel to downtown Kingston should follow the parking rules as they will be impartial in removing vehicles found in breach.

Armed with speed and their faces masked with bandannas to hide their identities, the wrecker operators declared that they will be undaunted in their duties despite appeals, and even threats, from those whose vehicles they have towed.

"You would be surprised at some of the offences that people commit on the road, some of the places where they park their vehicles and expect that we won't come and move it. But you have to understand that we are just doing our jobs," said another wrecker worker.

"You have to know how to work on the road because many things will reach you on the road if you don't know what you are doing. You have crazy people out there," he added, as he pointed out that unlike some of his counterparts, he is brave enough to show his face while on the job.

But veteran attorney-at-law Bert Samuels argued that while it might not be against the law, it is unethical for tow truck operators to cover their faces.

"It is not correct and it is not proper for someone who is carrying out a public function to hide their identity," said Samuels.

"What I would advise the public to do is to take the licence plate number of the wrecker and trace it back to the owner," said Samuels, as he argued that people should be able to see who is towing their vehicles.

Fellow attorney-at-law Jason Jones also described the masking of their faces by the men as improper.

"In the event that something should happen to your vehicle while they are handling it, then the reasonable individual would want to know who it is they are dealing with," said Jones.

Last Wednesday, at least four vehicles were hauled into the pound in downtown Kingston within a 10-minute period by the two wrecker crews.

In some instances, it took less than two minutes for the wrecker crews to get their trucks into position and attach cables to tow away the vehicle.

The operation was almost flawless as one crew scooped up an illegally parked SUV on Barry Street. The vehicle was speedily attached to the wrecker as onlookers shouted for the owner, who was nowhere in sight.

Minutes later, that owner and at least two others were seen dashing towards the entrance of the pound on Church Street where security guards there sought to verify the ownership of the towed vehicles before giving instructions as to what more had to be done.

"A lot of time vehicles come here and the owners turn up at the pound and want to get into an argument with we," said one guard at the pound.

"People pull them licensed guns on we. Sometimes even policemen come in here and act mad. But most of the times, they will calm down afterwards. Sometimes I let them sit down inside the guardhouse until them calm down.

"But you have to understand, it is back-to-school period now and most people can't even afford it. So when you take up a man's car and him have to go pay for it, it must hurt him," said the guard.

Motorists whose vehicles were towed for illegal parking could face fines of between $4,000 and $7,000.