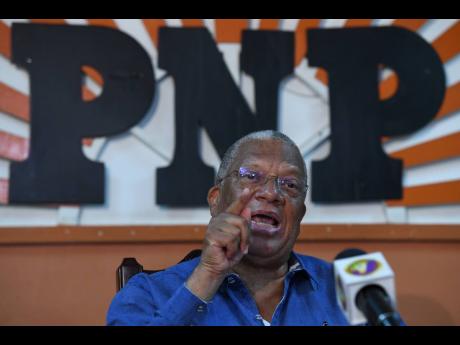 Supporters of under-pressure People’s National Party (PNP) President Dr Peter Phillips are beginning to push back as calls for his sacking intensify.

PNP insiders told The Gleaner that the “reinforcement” was necessary because Phillips’ camp had gathered intelligence of factions undermining his leadership.

The supporters, clad in orange, arrived on the compound shortly before 5 p.m. and ahead of the meeting, waving placards reading “One leader”, “There is no vacancy”, “Forward together”.

Phillips also got support from his chief of staff in the Office of the Leader of the Opposition, Imani Duncan-Price, who urged the frustrated Comrades to unite behind the party’s leader.

“You Comrades amaze me … ,” she charged on social-media site Facebook before putting forward her defence of Phillips.

“The last time Jamaica experienced our leader Peter [as] finance minister, where he led us through a very strict austere programme to get the economy back in shape to enable Jamaica,” Duncan-Price stated.

She said Phillips and the PNP are undergoing rebranding as ‘Team PNP’ with a leader who “works for all and not just a few”.

“The PNP communication team which was charged with all of that positioning clearly had challenges, and that’s why Peter brought in Krystal Tomlinson to lead that area and the rebranding,” she disclosed.

Phillips’ chief of staff also claimed that a nine-percentage-point fall in his unfavourability rating as revealed in a recent RJRGLEANER Don Anderson poll was caused by the programmes being implemented to rebrand him.

However, that change has not translated into a plus for the PNP president as his positive rating also fell.

Phillips and the secretariat of the PNP are under fire for having now lost two parliamentary seats in by-elections to the governing Jamaica Labour Party since Phillips took the president’s chair after the departure of Portia Simpson Miller in 2017.