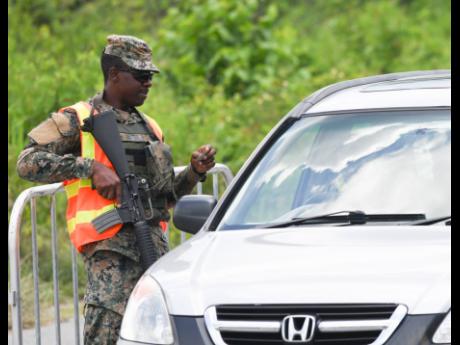 Ricardo Makyn
A JDF member checks a driver’s licence in Whitehouse, Westmoreland, which is under a state of public emergency.

Nervous residents in Westmoreland, including a woman who had four family members murdered by hoodlums in less than four months, are adamant that they want the latest state of emergency to remain in place for as long as possible.

“Them can stay as long as them want,” one taxi operator said.

Residents spoke to The Gleaner in hushed tones yesterday and requested that their names and pictures not be published out of fear of reprisals, even with heavily armed police and soldiers manning strategic checkpoints and patrolling hotspot communities.

They described how law-abiding citizens have been forced to cower as armed thugs openly trade bullets or stage brazen daytime robberies.

Dawn Slolely*, 54, revealed that between August 15 and December 10 last year, four of her in-laws were murdered in the volatile community known as ‘Russia’.

She said one of them was gunned down metres from the family home on Ricketts Street. The last one, her husband’s nephew, was also shot to death in the community.

The police report that since the start of the year, 43 persons have been reported killed in Westmoreland, making it the most “murder-dense” parish in the nation.

The brazenness of the criminals, residents say, was on full display in the community of Whitehouse last Saturday when gunmen barged into a business place shortly after 9 a.m. and robbed the operators and patrons.

But the residents all agree that just days into the state of emergency, there has been relative calm in Russia, Whitehouse, and other areas, and made it clear to lawmakers that they want the police and soldiers to remain in their communities.

“We need them for the protection of the citizens for as long as they can stay,” Slolely insisted.

Said another resident: ”Since them deh here, me nah see all the bikes weh a ride up an dung weh no licence.”

The state of emergency was declared on Tuesday and will remain in effect, initially, for 14 days.

* Not her real name