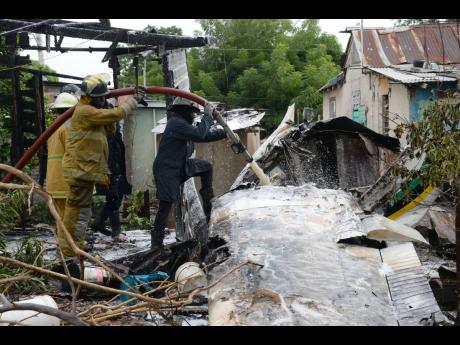 The family of Jonathan Worton, the flight instructor who died in a 2016 plane crash along with two aviation students in November 2016, is finalising plans to take legal action against the Caribbean Aviation Training Centre.

At a press conference on Tuesday at the St Andrew offices of Ludlow Black, the attorney representing the family, Worton’s mother, Angela; his father, James; and brother, Jason, said the grief of Worton’s passing remains fresh as no one has yet been held accountable for the accident even after a probe found that the Cessna aircraft was fitted with wrong and malfunctioning parts.

The ill-fated plane crashed into an abandoned house in the community of Greenwich Town and burst into flames seconds after take-off from the adjoining Tinson Pen Aerodrome in Kingston, from where the training centre operates, killing 31-year-old Worton, 19-year-old Danshuvar Gilmore, and 17-year-old Ramone Forbes in November 2016.

“Nothing can bring back my son, but we will be taking legal action. We are working with the lawyer and one other parent at least. The fact that the school is still open means justice hasn’t been served. The fact that there were so many errors and the fact that the maintenance people had not been replaced when they quit meant the school was not being run properly. It shouldn’t be putting people’s children in planes not fit and teaching them to fly. They are seriously negligent,” a clearly upset Angela said.

Pointing to the basis on which action will be brought against the flight school, Worton’s brother, Jason, alluded to one of the plane’s intake valves being of an incorrect make while other valves were worn down. He revealed that with no closure, the family has found it hard to cope and explained that legal action is only to ensure that other families don’t end up in a similar position as his.

“Those intake valves had no business in that engine. There were a number of parts which belonged in a scrap heap but were in that engine. It is all there in the report. We are not seeking to gain anything from this other than change. We would like to see policies changed. There is a lot of grief and anger from the loss. Our day-to-day process is difficult. It’s hard to even focus. Memories keep popping up in our heads. For us, it is intense,” he told The Gleaner.

Pushing back against a claim in the post-crash report that the proper procedures whenever an aircraft engine fails may not have been adhered to, attorney Ludlow Black ruled out any error on the part of the pilot, saying that based on the population density of the area, there was no safe way to crash-land.

“Someone has to be brought before the court to answer what really happened. I would say there are a lot of things which would indicate there may be a cover-up. ... A flight was attempted prior to that day in the same plane and and the pilot reported that he had come just short of taking off and tried to make full power and the engine didn’t make full power,” Black said.

In a Gleaner interview after the release of the report, the operator of the flight school raisied objections to a number of the findings, charging that, among other things, the actual parts of the crashed plane were not used in the probe.