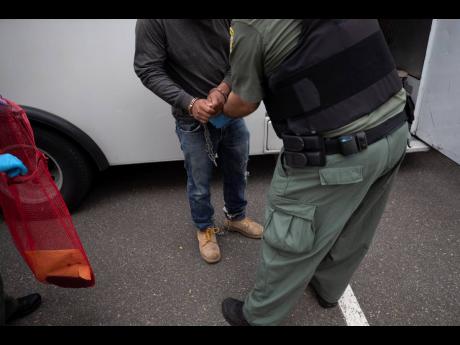 AP
In this July 8, 2019, file photo, a US Immigration and Customs Enforcement officer transfers a man in handcuffs and ankle cuffs on to a van during an operation in Escondido, California. Advocacy groups and unions are pressuring Marriott, MGM, and others not to house migrants who have been arrested by US Immigration and Customs Enforcement agents, but the US government says it sometimes needs bed space, and if hotels don’t help, it might have to split up families. 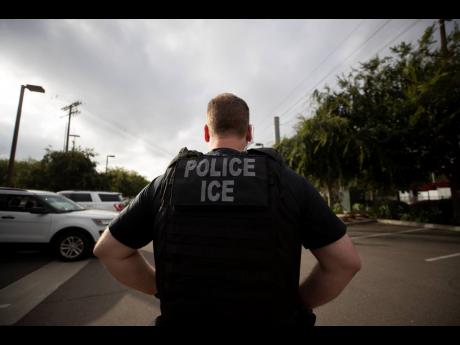 AP
FILE - In this July 8, 2019, file photo, a US Immigration and Customs Enforcement (ICE) officer looks on during an operation in Escondido, Calif. Advocacy groups and unions are pressuring Marriott, MGM and others not to house migrants who have been arrested by U.S. Immigration and Customs Enforcement agents. But the U.S. government says it sometimes needs bed space, and if hotels don’t help it might have to split up families. (AP Photo/Gregory Bull, File)
1
2

United States-based attorney Millicent Clarke says many illegal immigrants in the United States, including Jamaicans, are now on the run as the Immigration and Customs Enforcement (ICE) teams carry out raids to send home foreigners with final removal orders. This comes in the wake of announcements by President Donald Trump to deport them.

Clarke told The Gleaner yesterday that there have been cases where persons who did not receive final orders of removal are being picked up and ejected from trains and buses by ICE officials across a number of affected cities, including Miami and New York.

“What has been happening is that they have been taking people off buses and trains, and that is just a general raid and not the initiative [President Donald Trump] was talking about. There is just mass confusion at this point. Attorneys are busy! Authorities are taking people’s money for appeals, but all they do is deny applications like crazy, without due consideration.

“The whole thing has been harum-scarum. The fact that they announced there would be a raid, people who are implicated are on edge, and if they know they are being targeted, they move house or they don’t go to work,” she said.

According to Clarke, this latest ICE mission could be called off if limited results are achieved.

“My understanding is that they have picked up some people, but the people who have final removal orders are not the ones being targeted. There are a lot of agents in the streets who happened to run into people who are illegal aliens, and they picked them up but not on the level of any mass incarceration, though. However, we don’t know if it will pick up speed.”

Clarke’s account that no widespread incarceration has been occuring was echoed in an article published by the Associated Press yesterday entitled ‘Hotels become latest battleground over immigration detention’.

“So far, there’s been little evidence of widespread arrests,” the article read.

The story focuses on a battle that could possibly ensue between a number of hotels and the government.

Advocacy groups and unions are reported to be pressuring Marriot, MGM, and other hotels not to collude with ICE officials to house migrants who the authorities want detained before their possible deportation.

Arranging with some hotels to detain illegal immigrants until further notice has been a practice of ICE for decades.

“When the Trump administration announced immigration arrests targeting families the weekend of July 13 and said it might use hotels, big companies like Marriot, Hilton, Hyatt, and MGM Resorts all released statements saying that they don’t want their hotels used to detain migrants,” the article further stated.