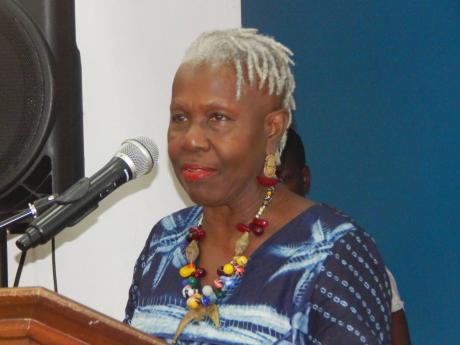 Cultural expert Professor Emerita Carolyn Cooper has thrown her support behind Dr André Haughton, who is championing the cause for the removal of the ban on the use of expletives during stage performances.

“Jamaican bad words have a quite respectable pedigree. They usually refer to perfectly good female body parts and functions. But the language of these bad words is often of African origin. So it’s almost impossible for some of us to fully appreciate the explosive power of a big, fat, bad word. It’s positive energy, not just negative. But we can’t see that. We’re still trapped in damning stereotypes about our culture,” Cooper told The Gleaner yesterday.

“Instead of dismissing our earthy bad words as signs of the devaluation of women, I take a different point of view. Jamaican bad words that refer to female genitalia and the bloody specifics of menstruation are signs of the potency of female sexuality. I think it’s this woman power that is summoned in the act of voicing the so-called bad word. It’s an acknowledgement of the role of women as mothers.”

Others benefitting from J’can culture

Haughton, on social media Sunday, expressed outrage that the police directed Mighty Crown, a group from Japan, to stop performing while at the Fully Loaded stage show in St Ann on Saturday night due to the use of expletives.

Speaking with The Gleaner yesterday, the opposition senator and economist said that Jamaica must stop allowing others to benefit from its culture.

“My view is [that] foreigners have been exploiting our culture for too long. As you can see, there is B*&bo@#$t festival in Belgium week after next week and B*&bo@#$t Beer. These are indigenous words,” Haughton said.

He added: “I think that these expressions are just a natural part of our language that should not be vilified in the dancehall space because it helps the artistes to articulate themselves in the way they want to. We understand from a cultural level that some people don’t like the utterances of those words. If you listen to them with objectivity, you’ll realise that these words have no underlying bad meaning. They are just expressions like exclamation marks, full stops, and commas.”

Haughton is also calling for events to be rated so that artistes can have guidelines when they are performing.

“You have to tell them like a rated R movie or a PG 13 so an artiste knows. Once he knows its PG 13, him can’t cuss no bad wud because a pickney him a deal with. But if [he is] booked for a rated R or a rated X, him can cuss bad word, you understand,” he said.