Vehicles shot up as gangsters trade bullets in Mountain View 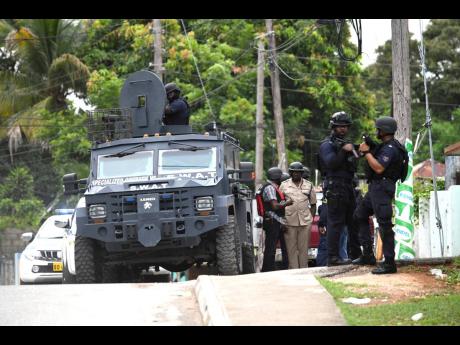 A tense calm hung over the Mountain View Road area yesterday in the vicinity of Baron Road, where gangsters engaged in a fierce gunbattle between Thursday night and Friday morning.

Some residents say the flare-up is believed to be as a result of the death of a man from neighbouring Goodwich Lane known only as ‘Buju’.

The police, however, believe that a dispute over missing material from a National Housing Trust (NHT) work site in the area may have led to the clash.

Superintendent Victor Hamilton, head of the Eastern Kingston Police, said the intervention of his officers seemingly did little to ease the tension between rival gangs from Jacques Road and Goodwich Lane.

“There was some conflict coming from last week, where there was a site being built – a National Housing Trust-financed site; two sites, in fact – and residents of both communities were employed. There were some accusations through last week about some special ply board being missing,” Hamilton told RJR News. “We made some interventions, and I, personally, went into both communities and spoke to persons as late as last week Tuesday. The ply boards have been found, so we thought that things had simmered down and persons would return to work, only to find last night that violence had broken out and one resident of Goodwich Lane was shot and killed.”

When The Gleaner visited the space yesterday, residents locked themselves inside their homes, peeping out from windows and their verandahs as the security forces combed the area.

At Byron Road, the reported border between the warring factions, there were visible spent shell casings on the ground and further evidence of gunfire as several vehicles parked along the roadway had bullet holes.

“Mr Gleaner, a foolishness the man dem a war for,” one man said. “A site over there suh and one set go steal ply board, and the next set go steal it back, and the first set a seh it fi run back, and [because] it nuh run back and name start call, the violence start. Man dead and we nuh know what else a go happen.”

A resident from Goodwich Lane said that Buju had gone to visit his pregnant daughter, who lives on Byron Road, when he met his demise.

“She call him say she a feel pain and she hungry, and him go dung deh,” he said. “Trust mi, is a humble man. Him sell clothes a town. A him look after him two daughter dem because dem madda run way gone a foreign ‘bout 12 years now. All di pregnant daughter drop down last night when she hear and dem admit her a hospital.”

The police say they have deployed more resources to the area.

“As it is just now, we think we have contained the violence and we are getting more resources, [but] we are still advising, at this time, that persons who do not have to use the area from Deanery Road to Windward Road, if you don’t have to go there, you should avoid the area,” SSP Hamilton warned yesterday.