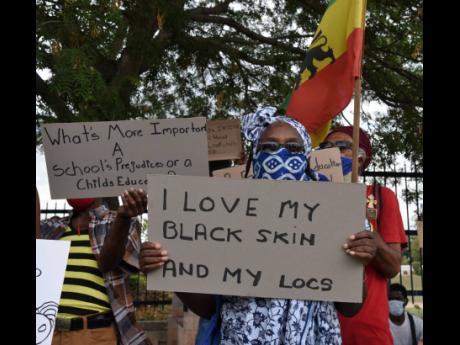 Ian Allen/Photographer
Rastafarians demonstrate in front of the Ministry of Education headquarters at National Heroes Circle, Kingston, on Tuesday to protest discrimination against the wearing of locked hair in schools. The protest was sparked by the July 31 Supreme Court ruling involving a then-five-year-old girl seeking to attend Kensington Primary School.

Using the controversial July 31 Supreme Court ruling in a case that centred on the wearing of dreadlocks and the right to self-expression, Rastafarians charged on Tuesday that religious adherents continue to face discrimination.

They have particularly taken umbrage to the notion, cited in court documents, that people with dreadlocks are more vulnerable to infestation of lice and ‘junjo’, Jamaican vernacular for mould or mildew.

Rastafarians mounted protests on Tuesday in front of the Ministry of Education’s offices in Jamaica’s two cities – Kingston in the east and Montego Bay in the west – in reaction to the ruling that the constitutional rights of a then five-year-old girl with locks were not breached in 2018 when Kensington Primary threatened to deny her access to school based on her hairstyle.

Though the child is not Rastafarian, the Rastafarian Gardens Benevolent Society said that the onus is now on the Government to embark on a public-education campaign to counter what they believe is a fallacy lacking supporting scientific evidence.

“What the judgment has done is to underscore the false misconception that is already being perpetuated in the public sphere that people with locks are prone to wearing their hair for days without washing, resulting in lice and junjo,” said Pamela Rowe-Williams, secretary of the Rastafarian group, on Tuesday.

Rowe-Williams insisted that Rastas still faced discrimination, particularly at the workplace and in some schools.

“In 2019, a young man requested a reference from the benevolent society to state that we know him as a Rastafari so that he could be employed as an accountant at a hotel in Montego Bay,” said Rowe-Williams.

“They also suggested that he style and groom his locks. Out of frustration, he eventually cut them.”

The benevolent society secretary said that Rastafarian parents were coming under increasing pressure to cut their children’s hair.

However, at least one principal in Montego Bay is advocating that schools accept children irrespective of whether their hair is locked.

“Come as you may. The hair is not going to stop them from learning,” said Venessa Addison of Green Pond Infant and Primary School.

Addison told The Gleaner that she does not refuse any child access to school on those grounds.

“Once we have the space, we give it to a child.”

Green Pond has Rastas, boys with plaits, and girls with sister locks, the principal said.

“Sometimes there is more than meets the eye. I have had a student with weave because she lives with her father who didn’t know how to comb her hair, and I was not going to stop that child from attending school,” Addison said.

In Kingston, Minister of Education Karl Samuda, who met with protesters outside his Heroes Circle offices, said that Jamaicans must not tolerate indifference to the Rastafarian faith.

“No child should be denied the right of entry to any school in Jamaica, so there is no issue in relation to the rights of the Rastafarians,” Samuda said.

In an interview with The Gleaner, Samuda said that the demonstrators wanted their rights to be explicitly enshrined in the Education Act.

“They want a definite and definitive policy position with regard to the level of tolerance for the involvement of the Rastafari in all aspects of Jamaican life, most importantly the education system. That is paramount, and that is the view of the administration, the prime minister, and the Cabinet,” said Samuda.