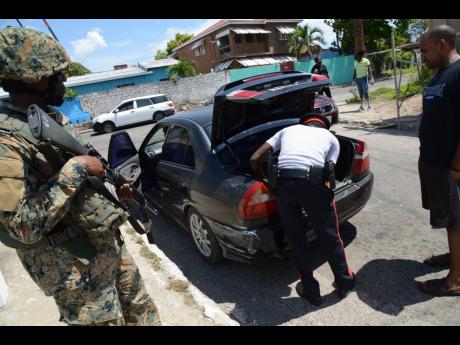 File
Members of the security forces conducting a spot check on Greenwich Road in Kingston as part of operations under a state of emergency on Sunday, September 23, 2018.

Police, soldiers, and election day workers are slated to cast their votes tomorrow in this year’s general election, but if one academician’s political forecast is correct, the security forces can expect a continuation of long working hours and cold nights at inner-city checkpoints when the next government is formed after the final ballot is cast on Thursday.

Christopher Charles, professor of political and social psychology at The University of the West Indies, Mona, based his views on two major predictions ­– the incumbent Jamaica Labour Party (JLP) will return to government and Jamaica’s spiralling homicide rate will help them towards that victory.

Charles last week stood behind his latest forecast, which, unlike polls, analyses historical social patterns to predict the outcome of the election. The forecast examined Jamaica’s economic growth and security as its main variables using data from official documents from 1962 to 2020, to develop the forecast model. Polls, on the other hand, give a more “bottom-up” analysis, he explained.

“The results of the statistical tests conducted for the 2020 election forecast indicates that an improvement in macroeconomic conditions and a rise in homicides increase the likelihood of the JLP winning the general election held this year,” read Charles’ forecast released last week.

“The big question is how and why does the homicide rate benefit the Government in terms of popularity, especially Prime Minister Andrew Holness?” it continued. “The Government is using extreme security measures or tough policing such as the zones of special operations (ZOSOs) and [states] of emergency (SOEs). These security measures are very popular with many registered voters, despite the reported cases of human-rights abuses and high homicide rate from 2016 to present.”

Charles made the point last week that historically, Jamaican voters have found tough security measures popular to combat high homicides, even though history has proven that such measures don’t work.

Since the start of the year, 75 Jamaicans have been fatally shot by policemen, the latest on Friday, according to the Independent Commission of Investigations.

“Coming from our colonial past, we are a very authoritarian society; we love the ‘big stick’ policy. Parents are rough, school teachers, principals, soldiers are authoritarian and rough ... . There’s a harshness in terms of how we deal with people who we are serving,” Charles explained in an interview on Friday.

“Therefore, when homicides are high, strong and tough policing measures are going to be popular. It doesn’t mean that these measures are favoured by the people or that they work,” argued Charles, frowning upon the “look in a car policing” or spot checks as they are now, which he argued have failed like their predecessors in former years.

Charles cited the 1974 Suppression of Crime Act and the popular 1976 state of emergency by the Michael Manley-led People’s National Party (PNP) government among some of the tough policing measures that have sparked public popularity for the ruling government during those periods.

“We know that unemployment and interest rates are down, and while these things are going down, it will redound to the advantage of the government in power. We also know that once homicides are going up, the research is saying that JLP is likely to win,” said Charles, who faced criticism after he inaccurately predicted that the PNP would have won the 2016 general election.

“At that time, I looked at the data and it gave the PNP the advantage,” he rebutted, adding that, “I welcome the criticism. As academicians, they are very beneficial to us and also to democracy.”

He said his success as a forecaster must be based on a series of predictions and not just one.

Up to the start of this month, Jamaica had recorded 769 murders islandwide, with St Andrew South, St James, St Catherine North, and Clarendon recording the highest numbers. This while ZOSOs and SOEs had been staples in those divisions for months, leaving some members of the security forces complaining of extended working hours, absence of promised stipends, and that in instances, their diets were limited to cup soups and crackers while patrolling the streets.

On Friday, Patrae Rowe, chairman of the Jamaica Police Federation, declined to comment on the story for fear of political backlash a day before cops take to the polls. He stressed, however, that for years, police have demanded certain benefits from both administrations and that those demands have not yet been met.

On their wish list is full healthcare coverage, the provision of a hospital for police officers, the payment of allowances and benefits, and the bolstering of operations within the ZOSOs and SOEs.

“A police officer cannot stay in one location for 12/14 hours and expect to still maintain his effectiveness. For you to have a police officer for 12/14 hours on static duty, it is not effective, and we believe that some of those static points could have been converted to patrols, which would change the tactic of the police officers and make them much more effective and alert,” Rowe told this newspaper, following the funerals of three policemen killed in a shoot-out with a heavily armed gunman in June.

“The [ZOSO/SOE] static points have been reduced to traffic checks and it has only been most effective to slow down traffic and nothing more. It is impractical for police officers to check every vehicle that goes through those points without it creating a road traffic nightmare,” he added.

See related story on B6