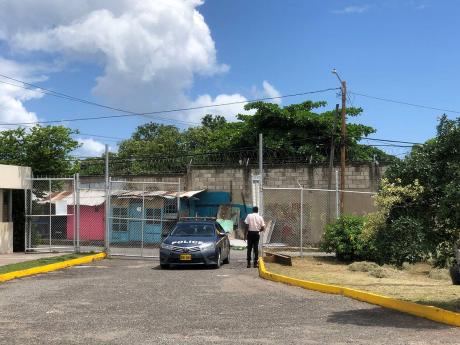 Photo by Andre Williams
A police service vehicle is seen at the Maxfield Park health centre after Monday’s fatal shooting.

The St Andrew South police are investigating Monday’s daring daylight murder of a man at the entrance to the Maxfield Park Comprehensive Health Centre shortly after the facility was opened.

The incident reportedly sent several persons scampering for cover as explosions rang out across the 89 Maxfield Avenue compound. The incident occurred about 8:40 a.m.

A member of staff told The Gleaner that they held their breath until word came that it was not a colleague who was killed.

“This happens too often. It’s like the clinic is a target for opposing gangsters … ,” the staff member, who requested anonymity, told The Gleaner.

The Gleaner gathers that the deceased man is allegedly from the Three Miles area.

Shortly before noon when a news team arrived, it was business as usual, unlike the previous time when a teen was killed at the facility in April 2019 which caused the premises to be closed for a day.

A police team from the St Andrew South division maintained a presence on the compound on Monday.

The South East Regional Health Authority confirmed that no staffer was injured in the attack.

An eyewitness told The Gleaner that the victim was attacked in the company of another individual.

“A two a dem a walk and as him step through, dem shoot him, and the other one run and dem escape … ,” the eyewitness said.

Head of the St Andrew South Police Division, Senior Superintendent Wayne Cameron, could not be reached, as several calls to his cell phone went unanswered.

The Ministry of Health and Wellness announced in January that it would have been spending more than $1.7 billion over three years to strengthen security at public-health facilities managed by SERHA.

The government also did an audit of security arrangements at public health institutions across the island.

“This is a new approach and it is in keeping with our vision that aims to be more responsive to what is happening in the environment … ,” Minister of Health and Wellness Christopher Tufton said at the signing.

Shalk Electronic Security Limited, whose guards are at the Maxfield Park Comprehensive Health Centre, was one of five security companies awarded contracts.