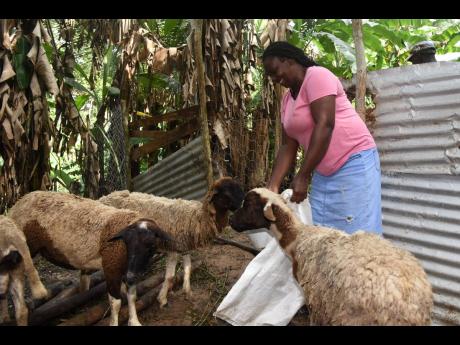 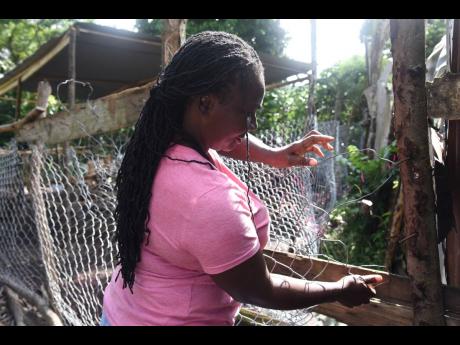 Kenyon Hemans/Photographer
Dahlia Nugent-Griffiths, goat farmer from Williamsfield, St Catherine, examines the fence that thieves cut to gain access to her herd. She is now pleading for the police to help combat this problem. 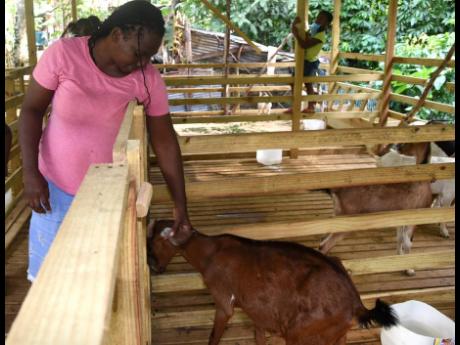 Kenyon Hemans/Photographer
Dahlia Nugent-Griffiths tenderly rubs the ear of one of the 30 goats left after thieves took off with 20.
1
2
3

That’s the mind-boggling estimate small farmer Dahlia Nugent-Griffiths has put on the loss of 20 head of goats to thieves who have plundered her herd this year. They made their assault on November 27.

Nugent-Griffiths’ story of anger and pain is one of hundreds in a broader narrative of pillage across Jamaica that costs farmers around $6 billion a year and mounting.

Rearing livestock is life and death for the Williamsfied resident, a 30-year veteran who has used the earnings from farming to care for her children, the oldest being 36.

This is the first time that criminals have taken off with her animals.

Her recollection of the night-time raid is like a scratched record – reminiscent of the heartbreaking tales of other farming interests who have been targeted by thieves.

Nugent-Griffiths was in bed at home when she was awakened by a bleat of desperation about 3 o’clock in the morning.

“I jumped up and wake mi husband and we come outside and only see one sheep. I shout out, ‘Tief!’, and di community rise up and we ran out pon di road and realised dat dem tief some a di goat dem,” she told The Gleaner.

The thieves left 30 goats behind.

The bandits had cut the wire to the goat pen and led the animals on to the roadway.

Discouragement is standard currency for farmers in Jamaica, and it is unclear whether chest-thumping by the Ministry of Agriculture and Fisheries about its praedial larceny programme will inspire confidence in Nugent-Griffiths.

Floyd Green, the portfolio minister, is reporting an increase in praedial larceny arrests, crediting new strategies as key to the success.

“Since January [to October], we have had 69 arrests, compared to 39 arrests, for the same period last year. So there is almost a 100 per cent increase in arrests since this new approach in praedial larceny,” he said.

“We are seeing great success in parishes like St Thomas,” Green added while addressing a virtual staging of Eat Jamaican Day on November 25.

Green has promised to reinforce the Praedial Larceny Prevention Coordination Unit, including the purchase of seven vehicles.

Nugent-Griffiths, while discouraged, said she intended to stay the course and maintain her two-storey goat pen.

“Dem no ramp fi tief di goat dem, as a five mi lose a mi gate last week. That’s why we need back di police dem up ya,” Devon McDonald told The Gleaner.

The spotlight will be on goat thieves as Christmas draws nearer, because their meat is particularly popular on dinner plates in the season.

It costs $1,650 for a bag of feed for the goats and sheep, but she supplements their diet with grass, fruits, and vegetables.

The police praedial larceny team has been chronically under-resourced in challenging a widespread problem that disproportionately hurts rural folk.

Minister Green said many incidents go unreported because farmers believe nothing will be done by the authorities, something Deputy Commissioner of Police Clifford Blake understands.

Earlier this year, Blake appeared to discount the relevance of reports, acknowledging that the smattering of overall cases did not capture reality on the ground.

Wednesday’s training initiative was attended virtually and in person by officers in the Praedial Larceny Prevention initiatives across all 19 police divisions, and was also addressed by Blake, who attended a state-ordered workshop on farm theft prevention this week, and said he understood the depth of the criminal network.

Green has urged municipal corporations that govern markets to crack down on the sale of stolen meat.

“If we improve our traceability measures, then we can significantly reduce this problem,” the minister added.