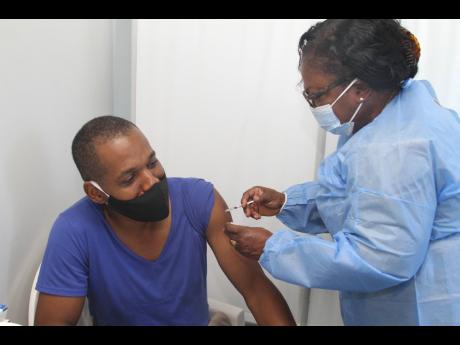 An audit is under way into the roll-out of the AstraZeneca vaccine, which met with challenges in the first two days when some persons not slated to receive the jab were thrust to the front of the line to be inoculated.

Permanent secretary in the Ministry of Health & Wellness, Dunstan Bryan, told a joint select committee of Parliament discussing issues related to COVID-19 on Tuesday that fewer than 100 persons outside of the priority groups had been inoculated.

Health and Wellness Minister Dr Christopher Tufton said that an audit had been preplanned for the vaccination drive and had not necessarily been activated “to determine deviant behaviour, even though that may turn up, but to also improve the efficiency of the programme”.

Opposition Leader Mark Golding had called for the audit after reports surfaced that persons who had not been on the priority list had received the jab last week.

The joint select committee was also informed that 14 doses of the AstraZeneca vaccine had been wasted since the inoculation exercise started.

Dr Melody Ennis, director of family services in the Ministry of Health & Wellness, said that a table collapsed and a vial broke with eight doses in western Jamaica. She said there was another incident in which a vial fell from someone, resulting in six doses going to waste.

In his contribution to the Budget Debate on Tuesday, Golding also raised concerns about reports of 10 doses of vaccine that went missing at the Cornwall Regional Hospital in St James.

Responding to criticisms in relation to the vaccine roll-out, Tufton said that at the National Chest Hospital, the system was shut down when there was a rush on the facility.

He told the committee that the dash for the vaccine had been triggered by persons calling others to take advantage.

At the St Joseph's Hospital, the health minister said that the plan was put in place to vaccinate private physicians and nurses.

“Many of them turned up and brought with them their significant other, their caregivers, or their very close friends,” Tufton said.

He sought to brush aside public concerns that wealthy Jamaicans seized the opportunity to run ahead of the vaccination schedule.

“The truth is because we were serving private practitioners ... so you come to a location and you see a lot of not-so-inexpensive cars, persons who are in line, there is an impression that is formed that it is an uptown crowd, and the truth is that category of persons who were being served at that time would create that impression,” Tufton added.

Approximately 64,000-plus doses have been shipped to Jamaica.

During Tuesday’s deliberations, Bryan said that the Government had revised the total number of vaccines to arrive into the country for this quarter.

He said that there was a downward projection of 100,000 vaccines from the 974,000 that were anticipated for the period.

“So we had projected an additional 100,000 – that has not materialised in the month of March,” Bryan said.