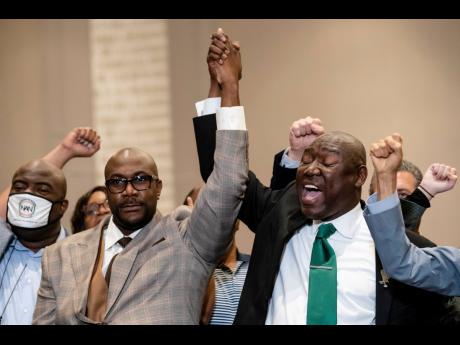 Former Minneapolis Officer Derek Chauvin was convicted on Tuesday of murder and manslaughter for pinning George Floyd to the pavement with his knee on the black man’s neck in a case that triggered worldwide protests, violence and a furious re-examination of racism and policing in the United States.

Chauvin, 45, was immediately led away with his hands cuffed behind his back and could be sent to prison for decades.

The verdict — guilty as charged on all counts, in a relatively swift, across-the-board victory for Floyd’s supporters — set off jubilation mixed with sorrow across the city and around the nation. Hundreds of people poured into the streets of Minneapolis, some running through traffic with banners. Drivers blared their horns in celebration.

“Today, we are able to breathe again,” Floyd’s younger brother Philonise said at a joyous family news conference where tears streamed down his face as he likened Floyd to the 1955 Mississippi lynching victim Emmett Till, except that this time there were cameras around to show the world what happened.

The jury of six whites and six black or multiracial people came back with its verdict after about 10 hours of deliberations over two days. The now-fired white officer was found guilty of second-degree unintentional murder, third-degree murder, and second-degree manslaughter.

Chauvin’s face was obscured by a COVID-19 mask, and little reaction could be seen beyond his eyes darting around the courtroom. His bail was immediately revoked. Sentencing will be in two months. The most serious charge carries up to 40 years in prison.

Defence attorney Eric Nelson followed Chauvin out of the courtroom without comment.

President Joe Biden welcomed the verdict, saying Floyd’s death was “a murder in full light of day, and it ripped the blinders off for the whole world” to see systemic racism.

But he warned: “It’s not enough. We can’t stop here. We’re going to deliver real change and reform. We can and we must do more to reduce the likelihood that tragedies like this will ever happen again.”

The jury’s decision was hailed around the country as justice by other political and civic leaders and celebrities, including former President Barack Obama.