George back in church 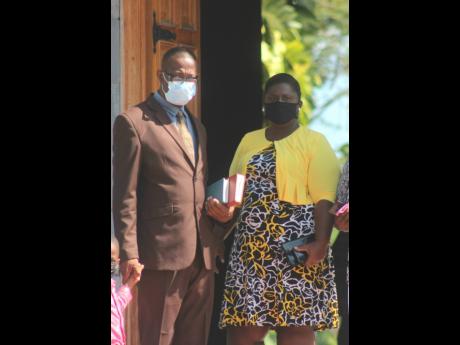 Ashley Anguin/Photographer
George Wright, MP for Westmoreland Central, and an unidentified woman depart St Peter's Anglican Church in Petersfield, Westmoreland, on Sunday morning. The parliamentarian has been embroiled in an assault saga over the last two weeks. 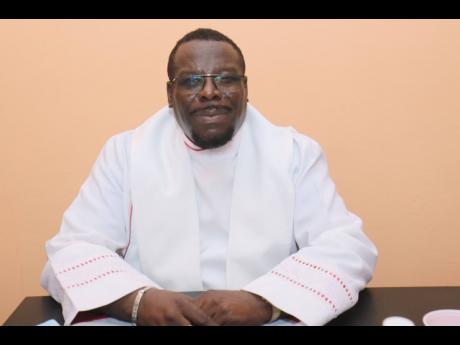 As calls mount for the resignation of under-fire Westmoreland Central Member of Parliament George Wright, pastor and confidant Custos Hartley Perrin sought on Sunday to cast the politician embroiled in an assault scandal as the victim of detractors...

As calls mount for the resignation of under-fire Westmoreland Central Member of Parliament George Wright, pastor and confidant Custos Hartley Perrin sought on Sunday to cast the politician embroiled in an assault scandal as the victim of detractors.

Perrin, who oversees the 353 active justices of the peace in Westmoreland, rebuked critics of Wright for seeking to grandstand in an abuse saga that has sparked national outrage and cost the parliamentarian huge political capital.

The 58-year-old Wright’s attendance at the Sunday service of St Peter’s Anglican Church was his first public appearance since departing from the Freeport Police Station more than a week ago over an April 6 physical altercation with his partner, Tannisha Singh.

Despite the police closing the case on the grounds that both Wright and Singh were uncooperative and because of inconclusive footage in a viral video of a woman being pummelled with fists and a stool, Wright was sidelined by the ruling Jamaica Labour Party’s parliamentary caucus. He has also gone on a leave of absence from the House of Representatives.

Perrin was insistent on Sunday that the church was a refuge of healing and that he would not cast judgement on Wright or Singh.

“Since the church is a sunny place for shady people, all I know is that we have our shortcomings, and we are not going to turn our backs on Mr Wright, nor Ms Singh, in the event that they are guilty of anything that we may have seen on video, or anywhere else,” Perrin told The Gleaner.

“Some of us who are the first to condemn must remember the words of Jesus Christ, who said ‘those who are innocent, throw the first stone’, and all those persons who picked up stones to hit had to quietly put their stones down.”

Wright, a confirmed member of Perrin’s Petersfield flock for the past five years, has had a troubled relationship with Singh. Perrin has mediated conflicts over the past two years.

Both partners had filed reports to the police on an April 6 squabble, but neither has confirmed whether the videoed incident and their altercation are one and the same.

Wright left church without speaking to the media on Sunday.

The Westmoreland custos said that forgiveness was not a matter for immediate pursuit until certain prerequisite actions were taken.

“Forgiveness comes after repentance, and I am not so sure that the two parties have come together and have reconciled between themselves. When that would have been done, then we are prepared to forgive,” said Perrin.

But an amalgamation of advocacy groups said on Sunday that Wright’s place in the Parliament was no longer tenable, issuing a late-evening missive that he should vacate his Westmoreland Central seat with immediate effect.

The groups, the Jamaica Accountability Meter Portal, National Integrity Action, Jamaicans for Justice, Institute of Law & Economics, and Stand Up For Jamaica, said “Jamaicans at home and abroad have been grappling with the question of whether parliamentarian George Wright is guilty of a violent and barbaric physical attack on a woman. Many have come to a conclusion based solely on the CCTV footage.”

“Like all accused of a crime, Mr Wright is afforded the constitutional right to not self-incriminate. However, in choosing silence, he has eroded trust and impaired the confidence of the public that he is paid to make laws and policies for. Mr Wright does not possess the fitness to lead in the House of Representatives,” the groups said in a statement.

But despite the reputational haemorrhaging nationally, Wright continues to have strong support in his political power base.

Jamaica Labour Party minority leader and councillor for the Georges Plain division, Rudolph Uter, praised Wright’s work in the Westmoreland Central constituency as exceptional and described the incident as “sad”.

“Mr Wright has been doing pretty well in representing the constituency, but, based on the alleged allegations, we as councillors have to press forward without letting this incident distract us,” Uter stated.

“Wright is only on leave of absence from the party, but, as far as the constituency is concerned, he is still the political representative, and I don’t think this alleged incident will create much of an impact on him where carrying out his political duties is concerned.”