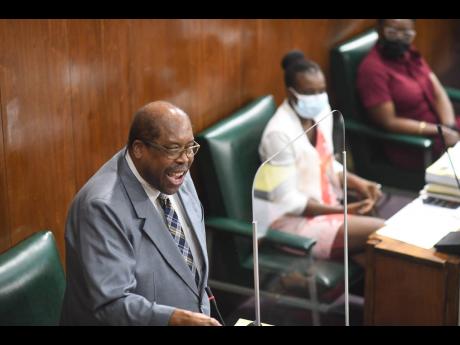 Opposition Senator Lambert Brown has been warned to retract his endorsement of vigilante justice or be deemed unfit to serve as a lawmaker.

The call by a civil-society pressure group comes in the wake of a series of scandals in the Parliament and advocacy from the speaker of the House for a public cleansing of the halls of political power.

During a heated debate in the Senate on Friday over the George Wright assault saga, Brown indicated that anyone who “violates” his daughter or any other female member of his family would have to face the consequences that would flow from him in the absence of the rule of law.

“So I don’t need a lawyer, once the jungle justice in the absence of the rule of law kicks in. I have held that view for many, many years,” Brown declared.

The senator said he would walk to the ‘William’ , a term used to describe the ‘gallows’, “proudly knowing that the honour of my family was held high”.

Jeanette Calder, executive director of the Jamaica Accountability Meter Portal, has criticised the opposition senator for losing “control to the point where he should be apologising to the country”.

But speaking with The Gleaner on Monday, Brown was unrepentant in the face of backlash.

“If it was my sister that was beaten with the stool and nothing is being done by the State, I would have to intervene,” Brown charged, referencing the allegations swirling over Westmoreland Central Member of Parliament George Wright, who has been ostracised by the ruling Jamaica Labour Party.

“We must stop beat women, and that’s what the issue is. The issue has nothing to do with jungle justice comment by me; that’s a distraction, that’s a deflection,” he added.

Referencing the April 6 viral video of a man clobbering a woman with fists and a stool, Brown said: “Dem don’t want to condemn that, and guh tell mi say if a man rape fi mi pickney mi fi just stand by in the absence of the rule of law. Unnu mussi mad! Unnu must be a set of wimps, and that’s why criminals get away. I don’t have anything to apologise for or withdraw,” Brown told The Gleaner.

Wright has not confirmed or denied that he was the aggressor in the video, but the police have closed the case.

Calder said that Brown’s pronouncements in the Senate were extraordinarily unfortunate.

Though describing Brown’s comments as egregious, Calder said they were not equivalent to the assault scandal because one represented action, while the other was an expression of intent.

However, Calder said that words “have weight and they have meaning, and words have more weight and should be even more meaningful when it is coming out of the mouth of a lawmaker”.