Jamaica has forfeited right as mediator in global conflicts – Hanna 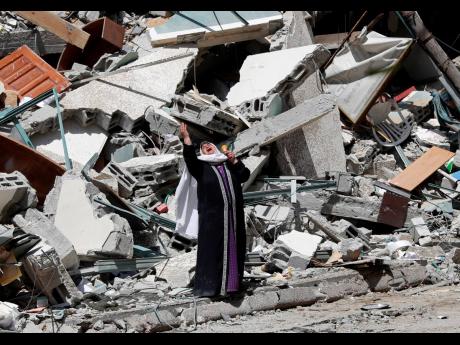 AP
A woman reacts while standing on Sunday near the rubble of a building that housed The Associated Press, broadcaster Al-Jazeera, and other media outlets in Gaza City. The building was destroyed by an Israeli airstrike a day earlier.

As the conflict between Israel and Hamas escalates in the Middle East, Opposition Spokesman on Foreign Affairs Lisa Hanna has urged the United Nations (UN) to move swiftly to bring a resolution to the violence that has claimed the lives of nearly 200 Palestinians and 10 Israelis.

“We believe that both parties need to have dialogue, and those powers that be, particularly in the United Nations, need to act quickly so that we can bring some normalcy to the region for a quick ceasefire and to have peace in that part of the world,” Hanna said in a Gleaner interview on Sunday.

Hanna said that Jamaica had an enviable reputation in the world for its principled approaches to solving these kinds of issues and for its voice to be heard among the many countries that played a mediatory role in conflict resolution.

“We have always been courageous and bold in the way that we see not only the survival of states, but how they must prevail and be protected,” the opposition spokesperson said.

“When it was detrimental to our own Independence, we’ve always taken principled positions in light of people who were threatened by might and by the dominion of others.”

However, Hanna signalled that in 2017 when Jamaica sat on the fence in a crucial emergency vote at the UN, it weakened its position as a mediator on the international stage.

“Because we took such a divergent position in 2017 by abstaining from the vote to keep Jerusalem neutral, and you could only surmise that the reason why we did it is because we were pandering to the United States, I believe that Jamaica has forfeited our right to the kind of principled foreign diplomacy in being a mediator in any of these affairs,” Hanna said.

Attempts to reach Foreign Affairs and Foreign Trade Minister Kamina Johnson Smith for comment were unsuccessful as her phone rang without answer. Questions sent to the minister via WhatsApp went unanswered.

In 2017, one hundred and twenty-eight members of the United Nations voted in favour of a draft measure that declared former US President Donald Trump’s Jerusalem decision “null and void”. The overwhelming backing for the resolution came despite US threats to cut funding.

Trump formally recognised Jerusalem as the capital of Israel on December 6, 2017, and stated that the American embassy would be moved from Tel Aviv to Jerusalem.

Noting that for decades the world had seen sporadic episodes of violence between Israel and the Palestinians, Hanna said it should be the mission of leaders of this generation to once and for all have the two-state solution for Palestine and Israel.

“Muslims and Jews and all religions should be able to live in harmony, safely practising what is important to their faith and having those buildings and those places that are sacred to their religions respected and protected by all,” she said.

Despite strong condemnations by members of the UN Security Council of the conflict between Israel and Palestinian militants, the council took no action to bring an end to the violence after meeting on Sunday.

At least 42 Palestinians were killed in the latest wave of Israeli air strikes, with 16 women and 10 children among the dead.

Since the resurgent conflict between Israel and Hamas, the Palestinian group said it had fired nearly 3,000 rockets into Israel.

Israeli Prime Minister Benjamin Netanyahu said that the air strikes would continue with full force for as long as necessary.