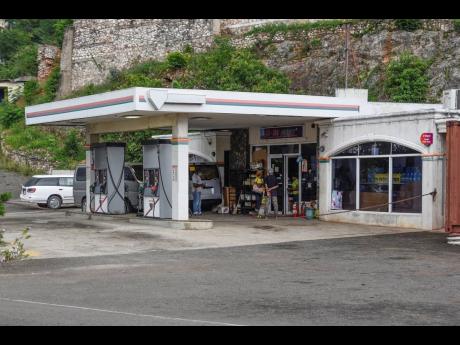 Nicholas Nunes/Photographer
The Red Hills, St Andrew-based Fi-Wi Mart service station which was hit twice by robbers on the weekend. One suspect was killed in an alleged confrontation with cops on Sunday night. 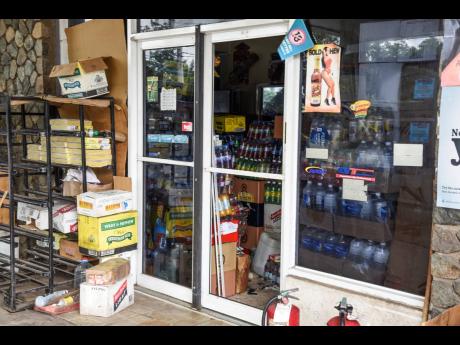 Nicholas Nunes/Photographer
The shattered door through which the crooks gained entrance to the establishment.
1
2

A bizarre twist of incidents in Red Hills, St Andrew, on Monday, left a bloody trail as investigators processed a crime scene twice following a early-morning multimillion-dollar robbery at a petrol station.

The gas station operator has been left distraught, having had her St Andrew store hit by robbers on consecutive nights during the islandwide curfew.

One suspect was killed by cops while another, whose condition remained unknown up to press time, had been taken to hospital.

One of the suspected robbers was shot dead during a reported gun battle with the police early yesterday morning during the second break-in.

Yvonne Johnson, service station operator, told The Gleaner that her establishment has been a target for crooks since 2019, with at least six break-ins at the Fi-Wi Mart, which is located metres away but within view of the Red Hills Police Station.

“I have been reporting it, been reporting it, but one of the time I got fed up and said I am not going back to the station because I don’t see where anything is being done,” she complained, although the police tried to assure her that they were investigating the incidents.

In the most recent incidents, the robbers struck on Saturday night, and before the losses could be tallied, they were back on Sunday night.

“Some of the statements (reports) not even reach the station yet di way dem ravage di place. Dem ravage it, so it take me some time to find out how much stuff [missing] – whole lot of monies worth,” Johnson told The Gleaner.

She did not have a figure for losses over the years, “but I know last month, it was $1.7 to $1.8 million they took last month alone”, without adding repair costs.

The police say they responded to the second break-in about 4 a.m. yesterday morning.

An unidentified man was shot and killed during a confrontation while the others escaped.

Yesterday, Johnson and her assistants were busy cleaning up. Bloodstains were visible on the floor of the plant, and on the side of a van that was used as a makeshift barrier because the damaged glass had not yet been repaired.

“Blood is inside, so I am just trying to put the place together,” she said.

“They came prepared. They had a little blow torch, hammer, screwdriver, and all sort of things. They came prepared for a war. They even had guns,” one of Johnson’s associates told The Gleaner.

The police were called to the location a second time minutes after 3 p.m. yesterday after strange sounds coming from a section of the building alerted the clean-up crew’s suspicions.

Head of the St Andrew North Police Division, Superintendent Aaron Fletcher, told The Gleaner that a man believed to have been an accomplice in the robbery Monday morning was discovered locked in a room with a home-made shotgun.

The man was shot by the police and later transported to hospital. The shotgun with one live round was seized, Fletcher said.

Independent Commission of Investigations called to process the scene a second time.

Fletcher told The Gleaner that the operators of the service station have been advised to boost their security arrangements based on the frequency of the robberies.

The hits on her eight-year operation have made her consider throwing in the towel.

“Just since recently I felt like I would want to close the station, but then when I think, I said I can’t let them deter me. I think I am a champion, so I am not going to let them deter me, but they have been breaking in, and every time they come, they get a vast amount,” she said.

“They live on me like Matlock,” Johnson said of the constant thievery.

Up to May 12, the St Andrew North Division had recorded a nine per cent year-on-year increase in robberies since the start of 2021. Twenty-four cases were recorded for the period this year, compared to 22 between January 1 and May 12 last year.