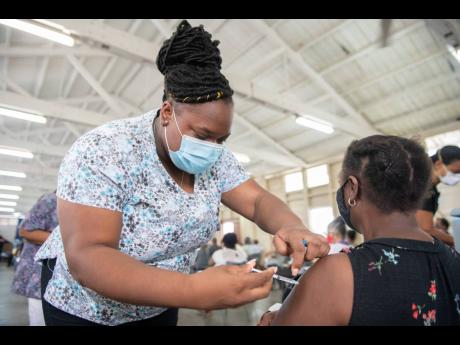 File
Jescinth Williams receives her COVID-19 jab from registered nurse Yanique Williams at the Mona Ageing and Wellness Centre during the vaccination blitz on Sunday, April 11.

National Health Fund (NHF) Chairman Howard Mitchell has sought to calm fears about Jamaica’s immediate vaccine inventory, disclosing on Sunday that there is sufficient stock of Oxford-AstraZeneca doses to cover the masses who turned out for a COVID-19 inoculation blitz in April.

That soother came as approximately 55,200 doses of AstraZeneca arrived at the Norman Manley International Airport on Sunday from the COVAX Facility, the global pool coordinated by the World Health Organization that aims to provide vaccines for poor, less-developed countries.

“What it will be enough for is to cover second doses for all the persons who have gotten first doses already. What I would like to see is a large volume coming in so we could start a new round of first doses,” Mitchell told The Gleaner on Sunday evening.

The new doses bring the overall inventory to just over 100,000 doses.

But with the eight- to 12-week period approaching for the delivery of second doses fast approaching for thousands of Jamaicans, priority will be given to many who had taken advantage of a five-day blitz that accounted for more than 70,000 recipients.

“My information is that they are doing second shots first, and if any’s left over, they will go back to the 50-plus (year-olds) with comorbidities,” Mitchell said.

As at May 28, more than 22,200 people had received their second and final dose of the vaccine.

As at the same date, 155,683 people had received at least one dose, representing just 8 per cent of the targeted population.

But before he starts feeling “comfortable”, Mitchell said he would like to see that figure inch close to 30 per cent.

A massive buy from United States-based supplier Johnson & Johnson could help with that effort, but those will be delivered in batches.

“We have paid a deposit for the supply of 1,479,194 Johnson & Johnson single-dose vaccine, but that supplier does not commence delivery until August, and it will be delivered in accordance with a schedule,” the NHF chairman said further.

“Between now and August, I would like to ensure that we get a fairly large volume so we can bring up the numbers because the tourist economy needs to be energised,” Mitchell stressed, signalling that the sector’s prospects of recovery depend heavily on the success of the inoculation drive.

The tourism sector is the largest earner of foreign exchange for the country and was gutted by travel and other coronavirus restrictions for much of 2020.

Mikael Phillips, chairman of the Public Administration and Appropriations Committee, told colleague lawmakers recently that there was strong competition within the region that had a higher vaccination take-up when compared with Jamaica’s tourism sector. He feared that visitors might change their itineraries.

That is 29 fewer deaths reported when compared with the previous week.

Overall, 945 people have now died in Jamaica from the disease in the past 14 months.

The positivity rate continues to remain well below 20 per cent as weekend curfews and restrictions on gathering continue.

On average last week, the rate was 10 per cent, with a high of 14.8 per cent recorded on Saturday, and the lowest, six per cent, reported on Tuesday, as a stay-at-home order restricted persons to the confines of their premises on Labour Day, Monday.