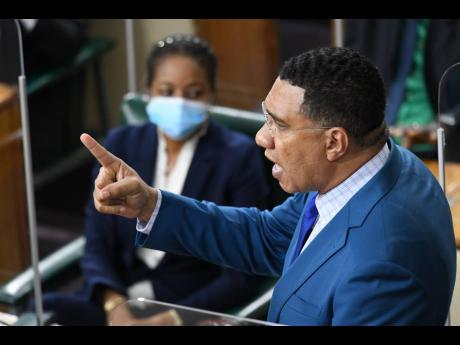 Rudolph Brown/Photographer
Prime Minister Andrew Holness gestures during his address in the House of Representatives on Tuesday. COVID-19 curfew hours will be relaxed effective June 3.

President of the Jamaica Manufacturers and Exporters Association (JMEA), Richard Pandohie, says the tweak in COVID-19 curfew hours is positive for commerce and will lead to a reduction in congestion as people carry out their business during the week.

Prime Minister Andrew Holness on Tuesday announced adjustments in curfew hours during weekdays and on Saturday.

The JMEA head said that the Government had a difficult job balancing all the variables in the matrix of the economy and safety.

“While there have been good indicators in terms of reduction in hospitalisation and a decrease in the positivity rate, the fact that [less than 10] per cent of the population have been vaccinated still leaves the country at a high risk,” he cautioned.

Pandohie expressed appreciation to the Government for reducing the quarantine period for fully vaccinated Jamaicans.

“I was lobbying for us to have the same treatment as business travellers coming to the country, of three days, but 14 days to eight days, we are not going to complain; it’s a step in the right direction,” he said.

On the question of vaccination, Pandohie said that the Government should make it easier for Jamaicans to receive the jab.

He said the administration should seriously consider using private doctors and pharmacists to carry out the inoculation exercise.

Pandohie argued that most people had a close relationship with their private practitioners. “There are more than 1,500 private doctors throughout this country. I think that would make a big difference when you don’t have to go to a government entity alone to get vaccinated,” the business leader told The Gleaner.

Dr Andrew Manning, president of the Medical Association of Jamaica, said that while the changes were not fully conversant with his organisation’s advocacy, doctors would work with the adjustments.

He urged Jamaicans to abide by the regulations of the Disaster Risk Management Act, acknowledging that the Government had moved to balance public-health concerns with the economy.

Manning also pushed for “greater and more consistent enforcement of the regulations”.