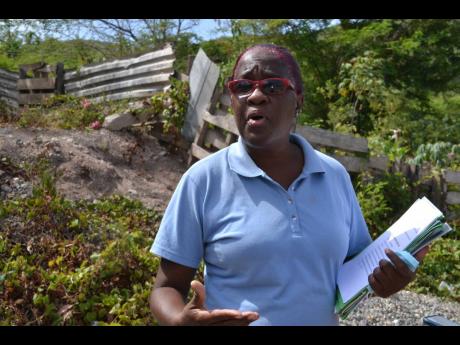 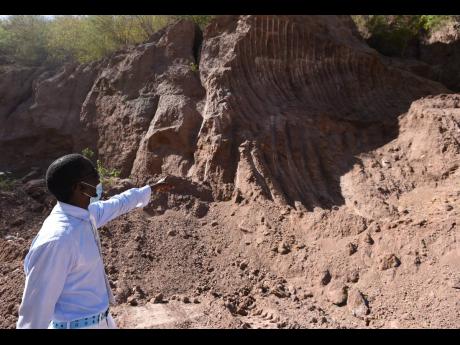 Kenyon Hemans/Photographer
Kirk Patterson points to a mountain of silt build-up which he blames on mining activity. 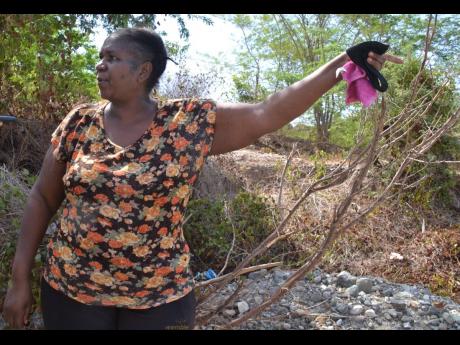 Photo by Errol Crosby
Right: Janet Ford recalls the devastation unleashed by Hurricane Lili in 2002, causing her mother to lose chickens and pigs and making her home uninhabitable.
1
2
3

Residents of Ten Miles, Bull Bay, are appealing for the desilting of the Bull Park River as Jamaica braces for an active Atlantic hurricane season that could bring up to 20 storms through the Caribbean. Mining and quarrying operations by Carib...

Residents of Ten Miles, Bull Bay, are appealing for the desilting of the Bull Park River as Jamaica braces for an active Atlantic hurricane season that could bring up to 20 storms through the Caribbean.

Mining and quarrying operations by Carib Cement Company have been blamed for sending mounds of sediment downriver, putting lives and property in imminent danger.

Antoinette Stewart, member of the Ten Miles Bucket Brigade (TMBB), a social and environmental justice group, said there is a “mountain of waste waiting to come down” in the river.

Stewart said that her mother relocated from the St Andrew East Rural community of Bito after questionable mining practices caused property damage. It appears to be a case of deja vu in Ten Miles now.

“We are being affected by the same improper mining activities. We are not asking them not to operate, we just want them to make us safe. When the Bull Park River burst its banks in 2002, the river and the road were on the same level,” Stewart recounted.

She said that residents’ protests drew the interest of the Jamaica Environment Trust (JET), which intervened and gave stronger voice to their lobby.

A consensus was reportedly forged with Carib Cement Company that it would desilt the river, particularly before rainy seasons.

The river was last desilted in 2015, and there has been significant build-up after the late 2020 heavy rains that walloped St Andrew East Rural.

Stewart shared that the community is now being told that the company’s management team has taken the decision to pursue a multiagency effort to desilt the Bull Park River.

“We are not pleased because we have been past that. We have been to the point where the stakeholders said they would set aside funding to clean the river,” said Stewart.

“Now we are hearing that a new management team is there and they have made a decision. Is it that you buy into a company and you buy into its profits but not its liabilities?”

However, Carib Cement communication and social impact coordinator, Chad Bryan, said the views of the residents were a “little misinformed”.

“We are no longer operating out there, and we haven’t been operating there since 2015. What is happening there is a process of natural sedimentation,” Bryan told The Gleaner on Saturday.

Meanwhile, Janet Ford, 64, who has resided in Ten Miles for four decades, has grown tired of the impact of the nearby mining and quarrying on her well-being.

“From dem start di gypsum mining, all hell bruk loose. We are in the hurricane season and di river cyah stay suh,” the resident lamented.

Ford told The Gleaner that her mother lost her mind after the 2002 devastation, which washed away her chickens and pigs and made her home uninhabitable. She eventually died at age 69, a few years after the ordeal.

Hurricane Lili battered the island on September 30, with flooding and landslides wreaking havoc in Bull Bay.

TMMB President Norman Lamont has spent more than 60 years in the community. He painted a picture of the Bull Park River as a shadow of its former glory.

“When I was a child, this river was part of the economic sustenance of people. People used to make their livelihood selling sand; we had the water for domestic use; we got shrimp from it; and it also had good vegetation, fruits, and other edible plants,” Lamont said.

It all went downhill, he said, when mining waste began to infiltrate the river.

“If they don’t do something immediately and the rain comes now, it’s going to be extremely devastating. It really needs immediate action to prevent serious loss to lives and property,” he said, adding that more than 15 feet of sediment currently sits under the Ten Miles bridge.

Three other residents with whom The Gleaner spoke echoed similar sentiments and pleaded for prompt action.

Founder of the Jamaica Environment Trust, Diana McCaulay, said she is disturbed by the fact that the river has not been desilted regularly even though assurances were made.

“To hear now that we have to go to taxpayers to get this done, on what time frame? I really sympathise with the people as there could be a tropical wave coming through at any time, and their lives and property would be at risk,” the environmentalist said.