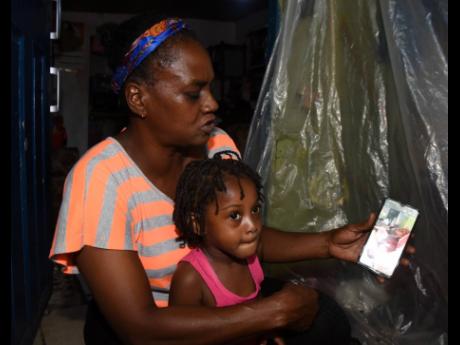 Kenyon Hemans/Photographer
Lorraine Mendez holds her three-year-old granddaughter Chloe Saunders as they speak to Mendez’s daughter, 30-year-old Trishauna Blair, who survived a February 17 motor vehicle crash on South Camp Road that claimed the life of one person. Blair has been hospitalised for four months with spinal injuries and is paralysed from the waist down. 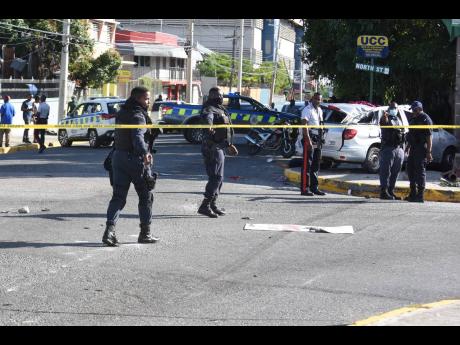 File
Left: Policemen cordon the intersection of North Street and South Camp Road, the site of a February 17 crash that killed one person and severely injured Trishauna Blair. 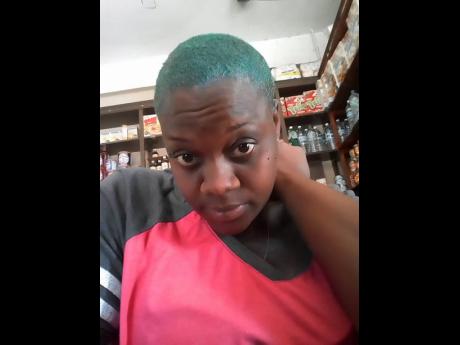 Trishauna Blair has been stuck in a hospital bed for four months, ever since she emerged with spinal injuries from a death car that slammed into a utility pole in Kingston on February 17.

Blair’s mother, Lorraine Mendez, has taken on the responsibility of caring for her three-year-old daughter, Chloe Saunders, who suffered a broken arm in the crash.

“Her spine broke in two places, so she’s not feeling anything from the waist down. She clutched the baby to save her life and that’s how she ended up with so much damage to her back,” Mendez told The Gleaner.

One person died in the accident.

Blair is one of hundreds of Jamaicans injured in traffic crashes whose incapacity is often captured in statistical terms but has a reach that extends much further. At age 30, Blair is at the height of her productive potential in the workforce and the impact of the injury has crushing economic consequences, both on a personal and national scale.

Hospitalisation has put a strain on Mendez’s finances for the costly purchases of medication, adult diapers, and other items.

“It’s been rough with the little income that I’m getting,” said Mendez, who works at Bellevue Hospital as a sanitation worker.

Mendez also had to move out her daughter’s belongings from the home she rented, as she cannot afford to pay the monthly fee and take care of her daughter and granddaughter.

The family’s crisis is exacerbated by the reality that Blair’s injuries are likely to require long-term care and rehabilitation.

The families of crash victims, particularly low-income Jamaicans, are often challenged with medical expenses, loss of income, and uncertainty about the future.

Vice-chairman of the National Road Safety Council, Dr Lucien Jones, said worldwide, 1.2 million people die on the roads and 90 per cent of the victims are from poor, underdeveloped countries.

“Year after year, two-thirds of those who die on our roads are vulnerable road users – pedestrians, motorcyclists and pedal cyclists. All of those people, for the most part, are poor people,” he said.

Money is not the only shadow cast over Mendez and her daughter. The risks associated with undergoing surgery – to place a pin in her spine – were too high owing to the location of a blood vessel, Mendez said.

Though doctors have suggested that Blair will not be able to walk, the mother remains hopeful, even as she reminisces on her daughter as a hard worker who loved her family and took care of her child.

“She couldn’t sit up, and now she can sit up. The CT scan showed that, so now they are training her back to sit up. God has been good,” she remarked.

Mendez is uncertain how long Blair will be hospitalised – but the final bill borne by both the family and State could be staggering.

The 2017 publication, Cost of Care: The Burden of Violence-related Injuries and Road Traffic Crashes to the Health Care System of Jamaica, revealed that taxpayers foot approximately $3.2 billion annually for the care of crash victims.

The direct cost to hospitals is $1.4 billion, with hospital stays accounting for 13 per cent, or $182 million.

Another 24 per cent is for consultation with doctors, while dressing and disposables were 19 per cent of the cost.

In one of the case studies, it was determined that a 24-year-old would lose $3.6 million in income, assuming that he works until age 65, earning a minimum wage of $5,600 weekly.

As the health sector tots up the bill, the emotional toll is incalculable.

Blair has had no family visits, except for her mother, owing to COVID-19 protocols. However, she communicates with family and friends via video calls.

Speaking from her bed at the Kingston Public Hospital on Monday, she told The Gleaner that her months-long stay has been hard.

“I am longing to come home, I can’t wait. I miss my family, and I’m always wondering how my daughter is managing,” Blair said.

Blair, too, is positive about the future, noting that she is making good progress.

The crash victim is due to receive therapy at the Sir John Golding Rehabilitation Centre in Mona.

The transport ministry has reported that the main cause of crashes since the start of the year has been excessive speed.

Mendez is appealing for financial assistance for her daughter, who will be unable to work for an undetermined period.

Persons wishing to assist the family can make donations to: