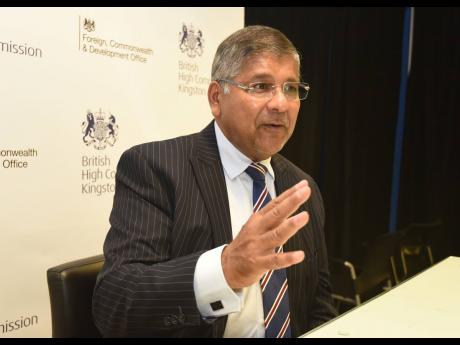 Outgoing British High Commissioner to Jamaica, Asif Ahmad, has admitted that the compensation scheme process for members of the Windrush Generation has been painfully slow.

In a recent Gleaner interview, Ahmad said that the British Government had committed to compensating those aggrieved by government policy and the funds were earmarked for that purpose.

“It was not about us hanging on to our purse strings. Two hundred and fifty million pounds was committed upfront. That was not a cap. That was just an allocation, and only a fraction of that has been used. Some people, sadly, have passed away before we even have completed that process,” he pointed out.

“The bureaucrats are working on trying to simplify this and get it going, but it is still slower than the ministers and we would like it to happen.”

The United Kingdom (UK) diplomat, who is at the end of his four-year tour of duty in Jamaica, said that the Windrush scandal was one of the most painful issues he had to deal with as high commissioner.

In 2019, the Home Office in Britain launched the Windrush Compensation Scheme as part of a set of measures to ‘right the wrongs’ experienced by the Windrush Generation and their families.

The Windrush scandal, which broke in 2017, found that the Home Office illegally sought to remove many members of the Windrush Generation, including Jamaicans, under its ‘hostile environment’ policy by telling them that they had no right to be in the UK.

“This was a government action enacted through Parliament and through policy and the frontline forces, which was completely wrong,” Ahmad stated.

He acknowledged that innocent people were disenfranchised, and as such, the UK Government apologised. The then British home secretary at the time, Amber Rudd, resigned in the wake of the scandal.

Ahmad said that the UK received a lot of cooperation from Jamaica in finding the individuals affected by the unfriendly government policy.

“We have gone through the system here, and there are a handful of people we are still helping actually get their rights restored and those who think they are entitled to compensation,” Ahmad said.

He said that there were some 14,000 cases that were being looked at in the UK.

Meanwhile, the British envoy said that designs for a Windrush memorial to be installed at the London Waterloo railway station in recognition of the contributions made by the Windrush generation have been shortlisted to four.

Ahmad said that he had renamed the gardens at the offices of the high commission on Trafalgar Road in Kingston the Windrush Gardens long before the so-called Windrush scandal.

He said that Windrush murals have also been established at the Norman Manley International Airport in Kingston.

“We are not hiding away from this legacy. We want to celebrate the contribution but too little, too slow, and we are really working hard to get that right,” he stated.