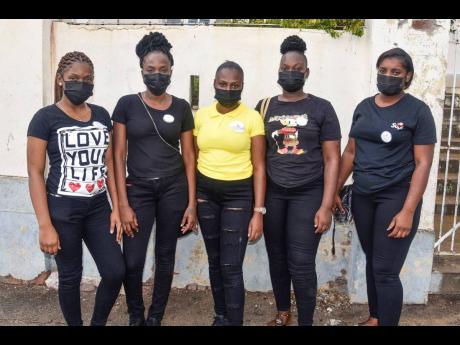 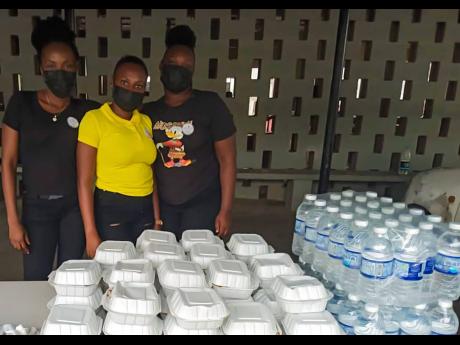 Contributed
From left: Alecia Edwards, Jameley Brown, Britney Hinds with some of the lunches and bottles of water donated.
1
2

Members of Heavens Charity Foundation on Thursday donated boxed lunches to Poor Relief Department of the Kingston and St Andrew Municipal Corporation in efforts to assist with the feeding of the homeless in the downtown Kingston.

Kerry Ann McAnuff, a Jamaican living in the United States who established the non-profit charity programme in order to assist vulnerable groups in Jamaica, told The Gleaner on Thursday that she intended to expand her outreach after starting with an Instagram account and giving away care packages and money to strangers seeking assistance on the platform.

The programme wishes to target single mothers, the homeless and elderly members of society.

Since August, McAnuff has been able to donate school supplies, tablets, and other electronics to deserving children who have been engaged in the virtual classrooms.

All donations have been made with her personal funds, McAnuff disclosed.

As Americans celebrated Thanksgiving on Thursday, she said it was only fitting to give back.

Though she had initially planned to conduct the feeding programme on August 25, her birthday, it was temporarily halted due to the effects of the pandemic and travel restrictions, McAnuff said that on November 25, as others would have warm meals in America, many Jamaicans would not be able to gather with their families or in their households to sit down and have dinner together.

“It always feels good to give back to them because they are human just like me, and God forbid, anything happen to me, I could [also] end up on the street,” she said.

She is encouraging other Jamaicans to be more sensitive to the homeless and to not view them as eyesores.

“They can be my father, my mother, my uncle. They can be a family member of mine and ... sometimes they don’t just get mad and end up in the streets,” she said, also noting that life’s challenges and unfortunate situations such as deportation and have landed many on public roads.

As a result, McAnuff urged the public to “reach out, don’t scorn them”, adding that if she could have been in Jamaica, she would offer to assist them with showers and grooming their hair.

McAnuff works in healthcare in New York and admits to having a strong attachment to people.

As the holiday season approaches, McAnuff is excited to give back to children who have never experienced the joy of the season and have never received a gift and will be blessing kids in December.

In addition, she plans to expand her outreach to other parishes by 2022.

Jameley Brown, who does majority of the groundwork in Jamaica because McAnuff is unable to travel, says it is a pleasure to volunteer her time.

“A nuh everybody have a family fi give them something for Christmas, so it’s always a pleasure to do stuff for them,” she explained.

Brown made the best of her day off on Thursday, despite the rain, to ensure that the homeless were fed.