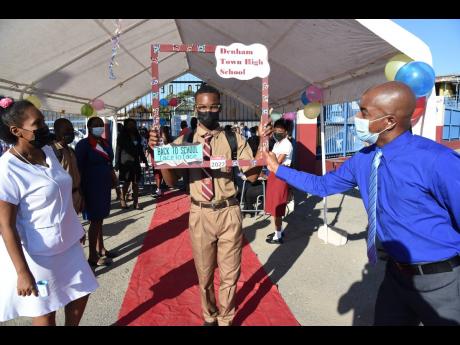 Ian Allen/Photographer
Donovan Hunter (right), acting principal of the Denham Town High School in Kingston, assists grade 11 student Romeo Booth in straightening a photo frame during a welcoming session to mark the resumption of face-to-face learning on Wednesday. Teachers and other members of staff also participated in the red-carpet affair.

Administrators at the Denham Town High School in Kingston and the police are banding together to try to shield kids from recruitment into gangs and shelter them from violence, planning to ramp up their efforts as the students return for the resumption of face-to-face classes.

Coupled with their exposure to violence, the pandemic has also taken a mental toll on several students, many of whom have been largely absent from virtual classrooms in the COVID-19 era.

Faced with this reality, the school has delayed the resumption of academic lessons as it seeks to take the first few days of the new school term to deal with some psycho-social issues.

“We’re starting off, not with teaching, but with just trying to ensure that their mental space is supported, that the psycho-social support is there for them,” Acting Principal Donovan Hunter noted yesterday as he chaperoned students on to the compound in a red-carpet affair to welcome them back to the physical space.

Guidance counsellor Dawn Scott-Turner noted that the intervention was crucial as students coming from the surrounding communities, such as Rose Town, Tivoli Gardens and Denham Town itself, where a zone of special operations (ZOSO) has been in effect since 2017, would have been exposed to violence and other forms of abuse.

She noted that there had been cases of students who had had prolonged exposure to abuse and violence at home and in their community since the closure oh schools, disclosing that an eighth-grader had witnessed the shooting death of her neighbour.

“That student is back at school, but at the same time, mentally, she is not here because she would have seen her friends being taken down at the hands of violence in the community. This student has been severely impacted by it. She had close friends who have died. She spoke of a child, about two years old, who died right next door to her. So she’s one of the cases that will have to be taken through some serious intervention to help her to come to a place of acceptance of what has happened and to get past it,” said Scott-Turner.

Through its Community Safety and Security Branch, the Jamaica Constabulary Force has also been working closely with the school in tackling issues of gang violence that have spilled over into the institution.

District Constable Annecia Marsh, who is attached to the Denham Town Police Station, told The Gleaner that several initiatives had been implemented at the school to equip students and parents with conflict-resolution skills and to help them cope with traumatic experiences.

The Boys Outreach for Success in Schools (BOSS) programme, for example, was launched during the pandemic in May last year to target male students at risk of becoming gang recruits.

Marsh explained that grade seven boys, especially, who were seen hanging out on the corners in the community were considered most vulnerable.

“Some of these boys are part of gangs, so we are trying to win them from now. We have more than 20 boys in the programme ... . And we include the seventh-graders because when I went on the road, I saw them on the corner. I realise that that’s where it begins, so I start to work with them,” she explained.

“The tenth-graders and eleventh-graders that we have are students who we know from before were giving problem, and they used to have turf war in the school. Those are the boys I started with first,” said Marsh.

Hunter expressed glee at the return of face-to-face classes, boasting that at least 300 students had shown up for school since Monday.

“Overall, we’re expecting about 700 students by next week ... . Normally, before COVID, we had 865 students,” the acting principal told The Gleaner, noting that a rigorous campaign was undertaken – using a town crier, WhatsApp messages, community walk-throughs, and letters left at community centres and wholesales – to get the message out that classes would be resuming on location.

“There are some students who, before the pandemic, were performing at a certain level, and when we tested them recently, in some cases, they are functioning up to three grade levels below what we would expect. Generally we get the children with literacy issues, and with them being out of school for almost two years, you can understand how [much worse] the problem is at this time,” she said.

Social Development Manager at the Jamaica Social Investment Fund, Mona Sue-Ho, told The Gleaner that remedial programmes have persisted despite the pandemic and that a transitional assistance programme is now in place to assist school-leavers entering the world of work.

“We want to ensure that every single young person in the space is connected either to the workforce, or to enterprise grants, or to help them further their education like at HEART/NSTA Trust so that we have more young people connected to productive activities. That is the big push for this year,” said Sue-Ho.