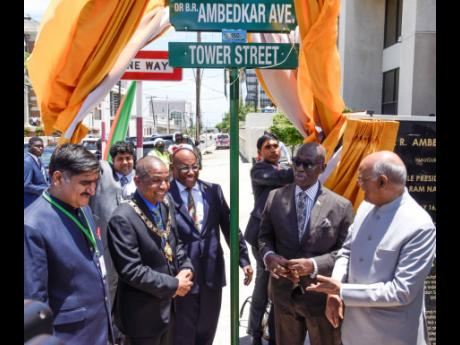 Kingston Mayor Delroy Williams has vowed to launch a campaign to scrub some colonial-era names from the capital city. Moments after Monday’s renaming of a section of Tower Street in honour of late civil-rights activist Dr Bhimrao Ambedkar, Williams...

Kingston Mayor Delroy Williams has vowed to launch a campaign to scrub some colonial-era names from the capital city.

Moments after Monday’s renaming of a section of Tower Street in honour of late civil-rights activist Dr Bhimrao Ambedkar, Williams said that it was an opportune time to memorialise nationalist mentors.

“There is a plan to rename streets in recognition of our history, in recognition of persons who have contributed to fight against social injustice across the globe, and the direction of the city of Kingston is to become a tourism city – an international city, an embracing city – and we want to be characterised in terms of attributes that are significant to us,” Williams said in a Gleaner interview.

Williams hailed Ambedkar as a “champion in the fight against discrimination and oppression across the globe”, adding that it was an honour to name a street after him.

Prior to the renaming ceremony, Indian President Ram Nath Kovind paid respects to National Hero Marcus Garvey at the National Heroes Park with a floral tribute.

Workers in the downtown Kingston financial district have expressed relief that the Kingston and St Andrew Municipal Corporation (KSAMC) has finally patched several potholes along East and Tower streets as it prepared for Monday’s renaming ceremony.

The section of Tower Street which runs perpendicular to Church Street and Lower South Camp Road was renamed Dr Bhimrao Ambedkar Avenue during activities to mark the state visit of Kovind.

Amid the wailing police sirens, the employees paused their routines to catch a glimpse of the ceremonies as one after another, officials took to the microphone to herald the occasion.

They could not hide their admiration of the improved road surface, noting the poor state which the street had been in for some time.

Leleka Johnson, an employee of the Institute of Jamaica (IOJ)/Natural History Museum of Jamaica, lamented the damage a huge crater was causing to vehicles at the intersection of Tower Street and East Street.

She showed The Gleaner an April 12 tweet she had made calling on the mayor to urgently repair the road.

“The hole was there for about a year,” Johnson said.

Another IOJ employee said that she had to be taking extra care as she painstakingly manoeuvred the craters. Even then, she feared that her vehicle could still be damaged.

On Monday, with relief, she welcomed the state visit.

Elaine Waugh was also glad for the attention.

With renaming of the street, she hopes that development work will continue and some of the old buildings along the roadway will now be renovated.

Williams admitted that plans were afoot to rehabilitate the roadway later this year, but the renaming caused the KSAMC to fast-track the repairs.