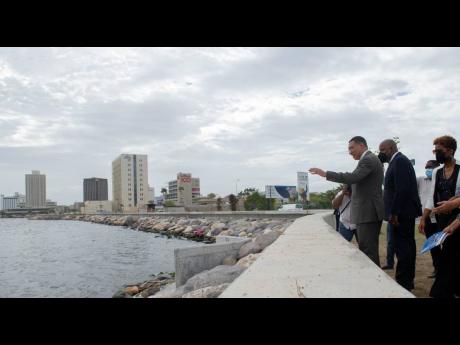 Ricardo Makyn/Chief Photo Editor
Prime Minister Andrew Holness waves to a fisherman out at sea at the official handover ceremony for the Port Royal Revetment project adjacent to the Breezy Castle sports complex on Wednesday. Looking on are Dr Wayne Henry, chairman of the Jamaica Social Investment Fund, and Imani Duncan-Price, who represented the leader of the Opposition.

Prime Minister Andrew Holness has announced that there is to be greater investment in the development of commercial and residential real estate in downtown Kingston.

“We have been speaking with the World Bank and the IFC (International Finance Corporation) about developing a project for the urban renewal of downtown Kingston and we are very serious about that. We believe that it can be a major catalyst for economic growth in this area,” Holness said during the official handover of the Port Royal Street Coastal Revetment Project on Wednesday.

The one-kilometre project was implemented by the Jamaica Social Investment Fund (JSIF) and funded by the World Bank to the tune of $1.3 billion.

“For the impact to be continuous, we will have to do approximately 20 kilometres from the west – going past the cement factory and going as close as possible to the round-about at the Palisadoes – in order to create a fully protected coastline for downtown Kingston,” Holness said.

JSIF Managing Director Omar Sweeney said the revetment project is the single largest project in the 25-year history of the fund. It included the implementation of one kilometre of composite seawall and armour stone revetment structure, upgrading of drainage features, rehabilitation and raising of one kilometre of existing roadway, and installation of a boardwalk to improve the site’s aesthetics and promote recreational activity along the shoreline.

A fishing beach was also created for fisherfolk in the area who previously berthed their vessels along the shoreline.

“If this intervention did not occur, what we see at Hellshire, we would’ve seen the waves at the prison wall,” Sweeney said, highlighting that if the rapid loss seen at the Hellshire beach were to occur downtown, the Tower Street Adult Correctional Centre could be threatened.

The roads, he noted, have also been rehabilitated to National Works Agency specifications of a 10-year life cycle.

People’s National Party caretaker for Kingston Central, Imani Duncan-Price, who represented party leader Mark Golding, commended the Government for the project, which has practical benefits for the community.

She said that the Opposition is in support of an extension as the coastal area is under significant pressure and requires proper reinforcement to further protect the communities.

“We would also be supportive of laws to strengthen penalties to companies that have the effluent actually being released into the harbour via the gullies. It is a beautiful boardwalk, where our women and men exercise, but sometimes they complain about the smell ... and I think the time has come to maximise the opportunity of this investment to actually drive further development, with stronger laws for the companies to comply with appropriate disposal of their effluent,” Duncan-Price appealed.

Holness agreed that there should be stronger penalties for those who defile the environment.

“As we improve our built environment, we must also concurrently act in decisive and instrumental ways to protect our natural environment. No one sitting in this audience can feel satisfied that sewage is going into the harbour, apparently untreated,” the prime minister said.

Culture Minister Olivia Grange said that two works of art would be commissioned along the stretch in keeping with the Jamaica 60 Independence celebrations.

“The project has a practical component as it is not only a project that serves to mitigate the ravages of climate change, but it has created a new blank slate on which the many creatives, street artists, and muralists can express their ideas and vision of the city of Kingston,” Grange said.