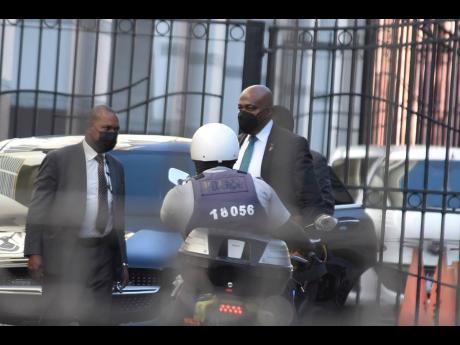 File
Chief Justice Bryan Sykes (right) arrives at the Supreme Court in this Monday, January 24, 2022, Gleaner photograph. The prosecution has been criticised for failing in its provision of evidence in the high-profile Clansman-One Don Gang trial.

While lambasting prosecutors for their persistent failure to provide supporting evidence in the Clansman-One Don Gang trial, Chief Justice Bryan Sykes also accused the police of taking too many shortcuts in the high-profile case.

The tough-talking judge, while expressing frustration with the prosecution’s style of presenting evidence, stressed that too much reliance was being placed on credibility rather than on affirmative and independent evidence.

“We must move away from talking about it’s a matter of credibility. Everything is about credibility,” he said.

Justice Sykes unloaded his frustration after a prosecutor, responding to a no-case submission for defendant Jason ‘City Puss’ Brown, noted that the police witness who had pointed him out in court had misidentified his voice on one of the three recordings.

The judge queried why the voice notes had not been submitted for this trial but for another case. Sykes was not pleased with that response.

“So we are to just once again accept his words,” the judge said.

The retired inspector of police who was called to identify the defendant had testified that he had listened to threatening voice notes demanding extortion fees, which were allegedly sent by Brown to business owners in Spanish Town.

The then inspector had later gone to Horizon Remand Centre, where he tricked Brown into speaking with him to ascertain whether the voice on the recordings was his.

The retired inspector said that conversations he had with Brown confirmed that the voices were the same.

The ex-cop also testified that he had also spent about an hour outside of Brown’s cell at the courthouse listening to another of his outbursts, which was similar to the voices heard on the recordings.

But Sykes, during his near six-minute-long rebuke, said it was unacceptable for the court to be asked to rely only on the ex-cop’s say-so when he had spent hours listening to the defendant’s voice and had visited him in him prison specifically to hear his voice for confirmation.

He questioned why the police had not employed the use of modern means of investigation during the visit. He also asked why the jail visit conversation had not been recorded.

“So we are just supposed to accept it on the face. That is not sufficient in the modern world,” he added.

Furthermore, he said the Crown, in seeking to discharge its burden of proof, must put its best evidence before the court.

The judge said it was amazing that a former director of public of prosecutions had lamented the absence of the use of technology to support evidence gathering when he was demitting office more than two decades ago. But the concern remains an issue even now.

“Here is a police officer who says he is going to Horizon, and the purpose of going to Horizon is to put a face to the voice. This is not an accidental meeting, and we must just trust his memory and recollection.

“He says he sits outside of a cell for nearly an hour, and this man is talking about voice identification and no recording. In this day and age? Really?” the judge remarked.

The prosecutor asked the judge to accept the retired inspector’s evidence as credible despite the absence of independent evidence. Justice Sykes was also urged to find that although the ex-cop had misidentified the voice attributed to Brown on one of the recordings, he was consistent in the other two instances.

Justice Sykes was also asked to consider the circumstances in Brown’s case, such as claims that he had been making calls from within prison and that he had multiple numbers, as was testified by the prosecution’s main witness.

But the judge again took issue with the prosecution’s request, noting that there was insufficient evidence.

“Why is the court being asked to infer this and that?” he asked.

The prosecution completed its response to the no-case submission for 24 of the remaining 28 defendants. Justice Sykes is expected to rule on those matters today.

Initially, 33 defendants were charged on a 25-count indictment under the Criminal Justice (Suppression of Criminal Organizations) Act and the Firearms Act. Five were released from custody after their cases were thrown out.