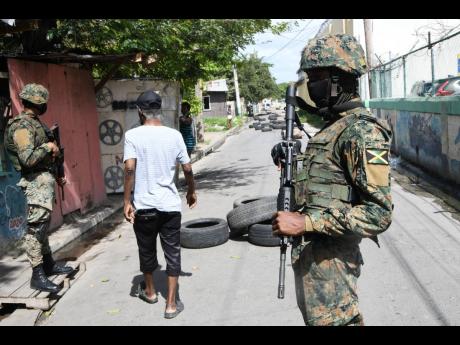 Rudolph Brown/Photographer
A resident walks past soldiers on a road in Spanish Town, St Catherine, on Wednesday. Fearful of reprisals after three men were killed a day earlier, residents littered the road with tyres to slow down potential attackers.

Armed with weapons purchased with loot from the multibillion-dollar lottery scam, more crooks have reportedly joined an extortion racket, squeezing millions out of business and transport operators in Spanish Town daily, using deadly fear to secure...

Armed with weapons purchased with loot from the multibillion-dollar lottery scam, more crooks have reportedly joined an extortion racket, squeezing millions out of business and transport operators in Spanish Town daily, using deadly fear to secure the silence of their helpless victims.

According to a source with knowledge of the happenings, the new reality now sees even the once-spared traditional business operators in the St Catherine capital now being hauled into the net as alleged members of the Clansman and One Don gangs are now demanding up to $5 million daily from a single business owner based on the nature of the operations.

The reports come as the prosecution in the Clansman-One Don Gang trial conceded on Tuesday that it had no evidence to support claims made by its two main witnesses that the criminal entity had been extorting cabbies, bus drivers, and vendors in St Catherine.

In 2015, the police had estimated that extortonists were raking in as much as $1.5 million daily, a figure that is believed to have significantly ballooned over the last seven years. Several persons have also reportedly been killed for rebuffing demands.

Dennis Robotham, president of the St Catherine Chamber of Commerce, told The Gleaner that he was aware that certain home-grown business owners were now being shaken down for millions of dollars, but fear has kept the matter under the radar.

“Extortion is in the mix. Lately, it began to rear its ugly head in a bigger way. Even some of the locals who were born in Spanish Town and have raised the profile of their businesses to another level to keep the town afloat are now the target of the extortion ring,” he said.

Recently, a business in the town was reportedly firebombed after the operator spurned the million-dollar request from extortionists. The business did not suffer any major losses, however, as the fire was contained, a well-placed source told The Gleaner.

The St Catherine North police confirmed the incident but would not discuss the matter much further except to say that it remains under investigation.

Robotham believes that a construction boom in Spanish Town, which has seen several new buildings going up, is also fuelling the requests for big money.

“Unlike former days, when the extortion money was held by a few top-tier members of the gangs and filtered down to the so-called foot soldiers, everyone now has big bucks from scamming, so they can now buy guns and call the shots,” Robotham added.

Despite the rise of lottery scamming, extortion continues to be lucrative for gangsters, he said, as business owners shy away from making reports or supporting investigations because of the fear of losing their lives or having their business firebombed.

It is believed that extortion has been playing a role in the current deadly conflict between the Clansman and One Don gangs, the latter of which is a breakaway from the former. Nearly 30 alleged members of the One Don Gang, including its reputed leader, are currently in custody facing multiple charges.

Informed sources told The Gleaner that the split now sees each faction trying to gain the upper hand in a fight for dominance in the Old Capital by wiping out the leadership of the other.

Yesterday’s killing of two men on Cumberland Road in Spanish Town, which saw the demise of an alleged top-tier member of the gang identified as Kemar Kelly alias ‘Mackerel’ and an unidentified man, was believed to be linked to the mission to get rid of Kelly as the rift intensifies and driven by a thirst for blood as cronies retaliate for the Railway Lane killing of four men.

Deputy Superintendent Leroy Edwards, who is in charge of operations at the St Catherine North Police Division, said that Kelly had been on the police’s radar for some time. He was held last week in an operation in which three vehicles were seized and a firearm recovered, but he was eventually released on Monday because the evidence was insufficient to charge him.

Another man suspected to be a low-level gang member sent to avenge Kelly’s murder was shot and injured by a police officer and a Ruger 9mm pistol with a magazine containing 13 rounds seized.

“The Government is investing in giving support to the police not only in legislation, but also in terms of surveillance, communication, and mobility to fight these crimes,” Chang said.

He acknowledged that it would be a difficult hurdle to overcome without evidence needed to secure convictions, noting that the police need the cooperation of the citizens to eliminate the problem.

Chang said that the Government was also open to making changes to the anti-gang legislation if necessary based on lessons learned when the current One Don trial is concluded.