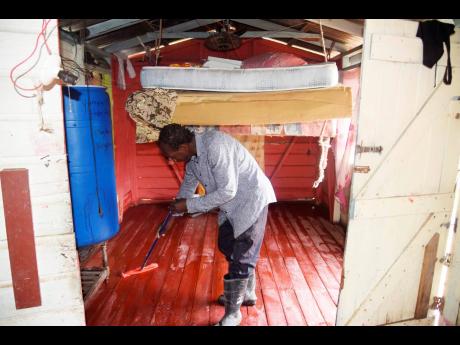 Dwight Burgess was forced to spend the eve of his 50th birthday elevating his bed and other furniture before abandoning his home as alarming floodwaters swept through Halse Hall, Clarendon, on Monday. Burgess and many other locals spent Tuesday...

Dwight Burgess was forced to spend the eve of his 50th birthday elevating his bed and other furniture before abandoning his home as alarming floodwaters swept through Halse Hall, Clarendon, on Monday.

Burgess and many other locals spent Tuesday morning clearing from their homes water left behind by Hurricane Ian, which veered west of Jamaica before pounding western Cuba, with Florida next in its sights.

“Yesterday (Monday) wasn’t a good experience; I wouldn’t like my worst enemy to experience it,” he told The Gleaner.

“Mi no used to sleep a people yard, so last night was very uncomfortable.”

His jeremiad was part of a chorus of complaint across southeast Clarendon – one of two parishes worst hit by Ian’s outer bands.

Burgess and other residents have almost become numb to the flood woes unleashed by severe weather, with some resigned that moving out of their communities is the only viable relief.

Derrick Green, another resident, lamented that he was not even able to take a shower.

Green blamed the perennial flooding of homes on inadequate drainage in the neighbourhood. A sinkhole in the vicinity was not able to contain heavy volumes of water, he said.

Eighty-one-year-old Valda James said she was brought to tears when she saw the magnitude of water engulfing her home on Monday.

Community members helped her to hoist her bed and other furniture on to concrete blocks.

Besides leaks in various rooms, a television mounted on a wall also sustained damage.

James said she has had to contend with flooding in the community since she was 19 years old – before Jamaica gained political independence 60 years ago.

Prime Minister Andrew Holness pledged to get a full and detailed report of the flood damage as technical officials survey roads, bridges, and other infrastructure as assessors tot up the preliminary bill.

Speaking at a handover ceremony for water trucks in Kingston on Tuesday, Holness said his Government would respond strongly to ensure that families and businesses that have suffered displacement recover.

“I want the Jamaican people to bear this in mind that it is almost a routine that for the last four years around this time we have had a severe weather event that has caused serious flooding.

“But what has happened? Has the Jamaican State failed to respond? No. Did the economy shut down? No. ... This Government gets up back very quickly and keeps the economy going.”

However, it’s uncertain whether that assurance will resonate with Clive Reid in Rocky Point, Clarendon.

As the showers intensified on Monday, Reid, who lives with three of his five children, reported that water from the streets surged past his front door and flowed through the back door.

He has to wear water boots to navigate the knee-high water that surrounds his home amid dense clumps of algae, tall grass, and schools of fish.

Stagnant water filled with tadpoles and moss has become a breeding ground for mosquitoes and a habitat for frogs.

No stranger to his home being breached by floodwaters, Reid has had to relocate to a relative’s house.

The lament is a familiar soundtrack in the flood-prone community, where some residents, including the elderly, were trapped for some time.

With no water boots at home, Carlton Golding, too, waded through the murky water, telling The Gleaner that residents have had to make more frequent doctor’s visits because of skin infections such as ringworm.

“We don’t have nobody to stand up for we, so water a kill we. All ringworm, all inna your toe you ketch dem,” adding that the few drains that existed were not routinely cleaned.

Barefooted, Knight shovelled away thick mud to channel run-off into a nearby gully.

He started his clean-up from as early as 7 a.m. and appeared no closer to completing his task as the day wound by eight hours later.

“Our team ... will continue to make assessments and engage constituents to determine the nature and extent of damage to homes and road infrastructure,” Charles told The Gleaner on Tuesday.

He noted that his team has joined residents in the recovery effort and in the distribution of care packages.

Tarpaulin and other items were provided by the Ministry of Local Government and Rural Development.

The Ministry of Labour and Social Security will be visiting impacted communities to do assessments and to determine specific items needed for relief, he said.