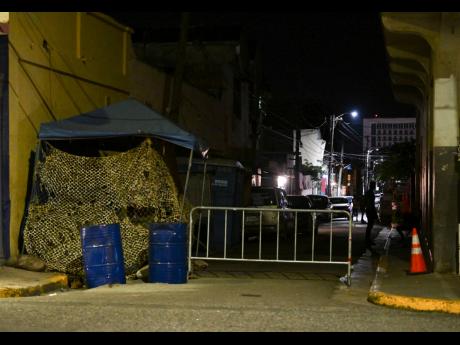 Ricardo Makyn/Chief Photo Editor
Residents mill about in the darkness near a security checkpoint at the intersection of Rosemary Lane and East Queen Street in central Kingston Tuesday night. The area has been under a state of emergency since November 15.

The offence of murder could soon attract more stringent penalties as the Government prepares to take legislation to Parliament in a matter of weeks to increase the minimum sentencing for the heinous crime to 30 years.

Prime Minister Andrew Holness made the announcement in Parliament Tuesday evening while debating an extension to the states of emergency recently declared by his administration. The Government used its majority to approve the extension, which requires a two-thirds majority.

But with Opposition Leader Mark Golding resisting an extension on various grounds, it is likely that his colleagues on the Opposition benches in the Senate would not give their imprimatur. The Government needs at least one Opposition vote in the Senate to achieve a two-thirds majority.

On the issue of the new legislation to impose more serious punishment for the offence of murder, the prime minister said that the measure would be brought to Parliament to amend the penalty.

“My thoughts on the matter, though not yet finalised, but the thinking is that we should give 30 years minimum for murder. The minister of justice has been directed to bring forward these changes immediately,” Holness told lawmakers.

The prime minister said that the legislation will be tabled early next year in the House of Representatives.

“This Government is being very serious about treating with murders in our country,” he said.

In a strident and spirited presentation on the extension of SOEs spanning seven parishes, Holness charged that “taking lives were now at epidemic levels” in Jamaica.

He said that if 1,000 or more people were dying from a communicable disease, the Government would immediately have declared an epidemic.

According to Holness, all efforts would be made to isolate infected persons and there would be no consideration for human rights.

“Murder is a public-health crisis in this country,” declared Holness, insisting that “the disease of violence poses a threat to all our lives”.

He said that Parliament must have the will to act.

“As prime minister, I am seized with the urgency of saving lives,” said Holness, noting that he hoped to forge consensus with the Opposition.

Providing an update on the Government’s legislative plans to tackle crime and violence, Holness said that the joint select committee set up to review the recently tabled Bail Act will begin its review of the bill early next year.

He urged members of civil society and other Jamaicans to make submissions to Parliament by November 30 this year.

Turning to the Enhanced Security Measures Act (ESMA), Holness said that a Cabinet submission will be made on the proposed law by year end.

The ESMA will also be tabled in Parliament early next year, according to Holness.

He said the delay in tabling the bill was linked, in part, to concerns raised by the parliamentary Opposition, which led the Government to recraft the proposed law in an effort to achieve consensus.

Another legislative change on the cards is an amendment to the Fingerprint Act.

Holness said that the Fingerprint Act was enacted in 1936 to facilitate the identification of criminals.

“Currently, it is easier to get a DNA sample than it is to get a fingerprint. The act is old and outdated; it doesn’t contemplate the new technologies that exist,” he said.

Holness said a new act will be tabled in Parliament to overhaul the current fingerprint law.

“This will be done to expand powers to the courts to order the taking of fingerprints and photographs for several offences which were not covered under the old Fingerprint Act,” said Holness.

The prime minister said that the proposed new law would also expand the offences scheduled; broaden the groups authorised to take fingerprints; extend the time for the retention of fingerprints; and provide for the use of approved modern technology for electronic taking of fingerprints and for the storage of data.