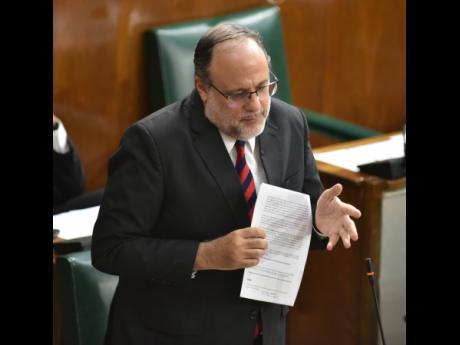 File
Opposition Leader Mark Golding is against the extension of SOEs.

Arguing that he took an oath in Parliament to defend the Constitution of Jamaica, Opposition Leader Mark Golding said that he could not support an extension of the current states of emergency (SOEs) imposed a week ago.

Debating the extension for the measures in Parliament on Tuesday, Golding contended that the continued use of SOEs from 2017 was a subversion of Jamaica’s constitutional order, which he did not support.

The opposition leader said that two separate court rulings have seriously questioned the constitutional legitimacy of the post-2017 use of SOEs.

He said that both cases have been appealed by the Government, but have not been heard.

“As it stands today, the courts have cast doubt on the constitutionality of the Government’s use of SOE procedure, and in that context, it is in my view highly inappropriate and a disregard for the cardinal constitutional principle of respecting the separation of powers among the three branches of the State … for the Government to continue using the SOE in this way,” Golding told colleague lawmakers.

But Prime Minister Andrew Holness hailed the success of the SOEs since its declaration on November 15.

Holness said that for the week of November 13-19, the country recorded 12 murders.

But charging that the Government had treated the parliamentary Opposition in a disrespectful manner, Golding said that the Holness administration did not share a revised draft of the SOE regulations or invited comment till last Thursday – two days after the emergency crackdown took effect.

He said the Opposition did not initially have the benefit of seeing the regulations despite the Government being aware that an extension beyond the 14-day period required bipartisan support.

“So when you call on me and the Opposition to come on board, don’t treat us in that disrespectful and disregarding way,” Golding told Holness.

“I cannot support the extension of the SOEs beyond 14 days. The society has grown tired of the SOEs,” he said.

Golding said that the Constitution was the ultimate safeguard of the fundamental rights of the Jamaican people against legislative or executive excesses which could abridge, abrogate, or otherwise diminish those freedoms.

Outlining the role of the SOE under the Constitution, Golding said that Section 20 (2b) contemplated a situation where action has been taken or is immediately threatened by any person or body of persons of such a nature and so extensive a scale that is likely to endanger the public safety or to deprive the community of supplies or services essential to life.

He said that in 2011 when the law was enacted, it was never contemplated that SOEs would become a routine crime-fighting tool.

“Indeed, had that been contemplated, our country could, and probably would, have been under a constant SOE for the last 20 years or more,” the opposition leader said.

Golding rubbished Holness’ analogy of crime as a public-health epidemic.

He said that the country does not respond to public-health crises by unconstitutional measures.

“We responded to it effectively by ordinary legislation: The Quarantine Act, the Disaster Risk Management Act – we went through the worst pandemic in 100 years without resorting to SOEs or attempts to violate constitutional norms,” Golding said.

“So that analogy is flawed when you are discussing whether or not a state of emergency is an appropriate approach to the problem that we have.”