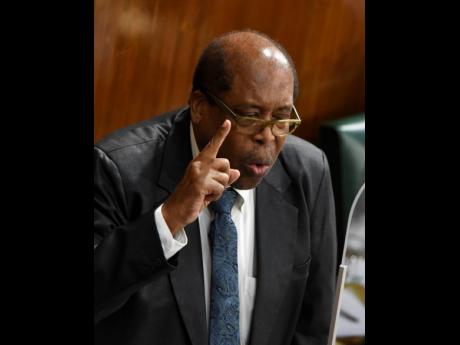 Opposition Senator Lambert Brown, who suggested the time frame, did so on the basis of the provisions made in the sexual harassment legislation.

He said that he was sensitive to the clause because there were people who have been removed from their jobs but may have not immediately claimed to be victims of whistle-blowing.

“I could see for example, an accountant being asked to sign off on documents for donations, for argument sake, without the approval of the board accompanying such, or with the name inconsistent with the board resolution, and such a person may very well be removed from office but wasn’t aware that under the Protected Disclosures Act, such a person could have claimed detriment,” Brown said.

St Andrew South East Member of Parliament Julian Robinson said he knew of a case in the public sector where an employee provided corruption-related information and was not immediately victimised.

He said that the person, three or four years later, remained stagnant and was overlooked for promotion in favour of others with fewer qualifications or less experience.

But government Senator Kavan Gayle warned against the implementation of a six-year statute of limitation.

“The context in the sexual harassment bill for the six years was suggesting that someone would’ve suffered in silence for that extended period. We have to be very clear that we are utilising the similar context in which is being suggested here,” the trade unionist said.

Gayle said the fear of occupational detriment is one of the clear reasons employees may not be willing to come forward.

“Don’t leave it to just that the worker might have to go and defend themselves, but there are no established consequences for employers.”

National Integrity Action’s (NIA) principal director, Professor Trevor Munroe, who made a submission earlier in the sitting, agreed that the clause could be amended to include a period.

Director of corporate and special services at the Office of the Services Commission (OSC), Milton Foster, reasoned that victimisation should not be limited to the workplace.

“What about relatives? Sometimes the reaction is not against the immediate individual but against a relative, so that also needs to be factored in. The act needs to include personal attacks and threats outside of regular working hours,” Foster said in his submission.

Meanwhile, Munroe said in the first few years following the enactment of the whistleblower legislation, there was “absolutely no protected disclosure”.

He said following a review in 2017, there were two disclosures but they were not considered “protected”.

“This is entirely unacceptable to have state-of-the-art legislation not being known to our people, much less utilised … ,” the transparency lobby chief said.