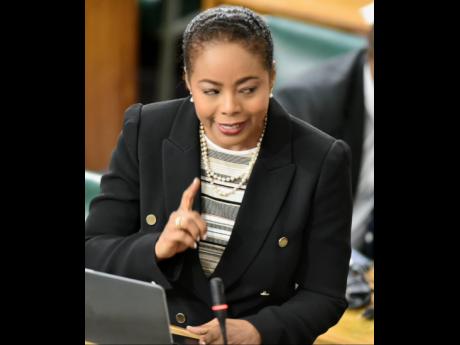 Minister of Legal and Constitutional Affairs Marlene Malahoo Forte schooled Jamaican Bar Association (JAMBAR) President Alexander Williams in case law when she dismissed as incorrect an assertion by him that bail must not be used as a crime-fighting tool.

Debating the new Bail Act 2022, which is being examined by a joint select committee of Parliament, Williams said there are different tools available to the executive and that the police must operate in tandem with the Constitution.

“This committee and Parliament, in approaching the issue of bail, must not in a broad sense approach it as one of those tools you use to fight crime. You must fight crime given the fundamental rights and freedoms that we have for good reason and adjust our crime fighting accordingly,” the senior attorney told committee members.

However, labelling Williams’ remarks as “quite a headline statement”, Malahoo Forte shredded the lawyer’s assertions by referencing case law in the matter of Hurnam and the State.

The Cabinet minister argued that the Privy Council noted five grounds for refusing and using bail.

“So not my words, but what our highest court has pronounced and the prevention of crime actually exists in the jurisdiction where it is part of our law that where there are grounds to believe that a defendant, if released on bail, would commit an offence, then that person can properly be remanded,” she said.

The minister of legal and constitutional affairs said that “as populist as that statement is, it is not accurate in law in the Jamaican jurisprudence”.

“We have to take great care in ensuring that our statements are correct in law,” she insisted.

Williams said that he suspects that the mischief being addressed by the proposed law is to assist the police in detecting, investigating, and preparing cases for court.

He argued that those issues would not be addressed by “tinkering with bail provisions”.

“... Even if we are to pass this bail bill as is currently before us, you will still have the problems with the police detecting, investigating, putting cases in a proper order for it to come before the courts,” the JAMBAR president said.

The provision of bail, like other constitutional rights exists, said Williams, noting that whatever tools are used for crime fighting must exist and operate against that background.

Williams said that the security forces should use cordons and searches, surveillance, and arrest without detention in certain circumstances subject to habeas corpus and other provisions available in law.

Habeas corpus is recourse through which a person can request to be brought before the court for determination of the lawfulness of his or her detention.