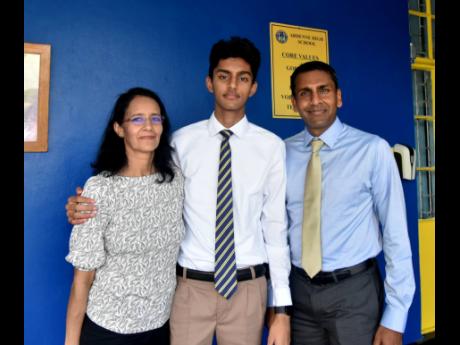 Aayush placed first in economics, second in chemistry, second in English literature, seventh in biology, eighth in information technology, and eighth in physics in the regional exams.

“I am very passionate about my studies,” the lower sixth-form student and class prefect said in a Gleaner interview on Thursday.

Mom Alka Jain stated that Aayush would often return home from school to inform her about the fun-filled day he had while learning new things.

She added that ever since Aayush was a young lad, he showed promise of being an outstanding student.

His father, Alok Jain, told The Gleaner that he was extremely proud of his son’s achievement.

“These results are absolutely phenomenal,” said Alok, who, along with Aayush’s 20-year-old sister, Aashni, are also Ardenne alumni, graduating in 1985 and 2018, respectively.

Alok further said that Aayush, who not only strives academically, does not allow success to “fly to his head”.

A past student of Porter’s Centre for Knowledge on Windsor Avenue in Kingston, Aayush received a gold medal in the Junior Mathematical Olympiad while in grades four and six and was also awarded a Grade Six Achievement Test scholarship.

When he participated in the senior competitions, he received a gold medal while in grade 10 and silver in grade eight.

As team captain, Aayush also led the Ardenne robotics team, ‘Origin Coders’, to victory in the inaugural JamA.I.ca Codefest Hackathon, which was hosted by the US Embassy in October.

Aayush describes himself as a diligent student, who is determined to succeed even in subjects of which he is not fond.

He explained that while he was initially surprised by his accomplishments, he is grateful that his hard work has paid off.

Despite often finding himself conducting last-minute examination preparations, Aayush said that he tries to keep on top of his lessons, reviewing notes as the topics are taught.

Aayush said he is most proud of a bronze medal he won representing Jamaica at the annual Central American and Caribbean Mathematics Olympiad, which was held virtually in August. Twelve countries from across the region participated. Aayush’s was Jamaica’s first medal since 2016.

In his downtime, Aayush enjoys playing tennis and football. He also loves to play the guitar.

Although he has not decided on a career path, Aayush is looking to further his studies at university in the field of physics and mathematics.

Outside of the classroom, Aayush is said to be reserved at times, attentive, and kind.

“He’s really the perfect child. You can’t really ask for anything more,” his father said.

Aayush said he is kept motivated by his desire to avoid failure.

“I don’t want to let any of my potential go to waste,” he told The Gleaner.

The teenager is encouraging other students to never give up on their ambitions and to always remain confident as “there is nothing that’s impossible”.

“The most important thing you can do is to learn from your mistakes,” he added.

Aayush, his mother, and his sister will be taking a trip to India in December, where Aayush is looking forward to visiting a desert.

His mother stated that gaining new experiences through leisure is important for a sense of balance in a student’s life.